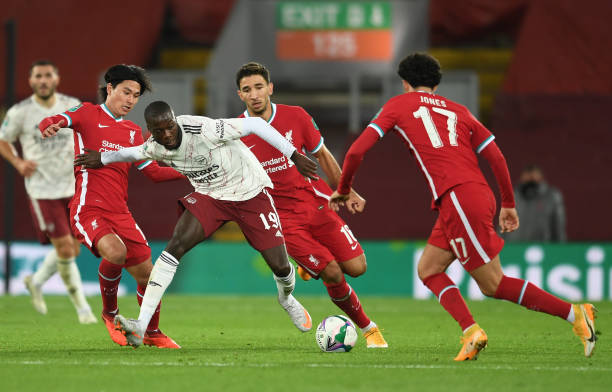 ( Liverpool vs Arsenal / Photo via Getty )

Arsenal have progressed to the Carabao Cup quarter finals after beating Liverpool 5-4 in penalties at the Anfield Stadium, an opposite of last season where the gunners lost in the penalties after the match ending 5-5. This will be a huge morale booster for the North Londoners as they got a win over Liverpool in the penalties once again even though the Premier League Champions used a rotated squad.

The first half started off well for the gunners as they seemed to have control of the game as they fully attacked the home side with intent but they however were not able to get any clear cut chances since Liverpool were good at the back even though it was a makeshift defence. Arsenal even had the ball into the back of the net but the referee had blown the whistle for a possible foul hence not counting.

Arsenal had possession for most of the first half but they never looked like they were scoring as most of their long balls were getting stopped by the Liverpool centre backs but the game heated up at the end of the first 45 minutes as the home side came close to scoring but Jota’s shot was saved by Leno and the rebound hit the bar.

LIVERPOOL, ENGLAND – OCTOBER 01: Bernd Leno of Arsenal makes the 2nd of his penalty saves in the shoot out during the Carabao Cup fourth round match between Liverpool and Arsenal at Anfield on October 01, 2020 in Liverpool, England. Football Stadiums around United Kingdom remain empty due to the Coronavirus Pandemic as Government social distancing laws prohibit fans inside venues resulting in fixtures being played behind closed doors. (Photo by David Price/Arsenal FC via Getty Images)

Liverpool was the better side at the start of the second half as they started creating more chances but Bernd Leno was very impressive as he made a good number of saves to deny the home side a lead. The gunners failed to create that many clear cut chances in the second half apart from the header by Holding that was saved by Adrian. Elneny, Lacazette and Ainsley Maitland-Niles were all later brought in by Mikel Arteta but the game ended 0-0 hence penalties being needed to decide who goes through.

Arsenal won the match in penalties after scoring five of their six penalties and Bernd Leno made two saves hence Mikel Arteta’s men qualify for the next round. Arsenal’s penalty takers were: Lacazette, Cedric, Elneny(saved), Ainsley, Pepe, Willock.

Liverpool 3-1 Arsenal: Talking points and what we learnt as Arsenal lost their first game of the season