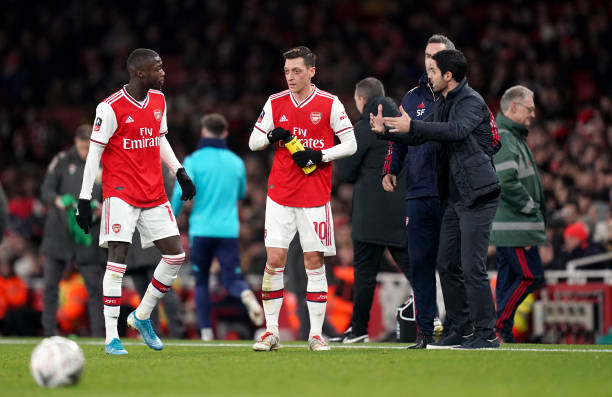 Mesut Ozil started in the first 10 Premier League games under Mikel Arteta but things seemed to change when football returned after a few months of lockdown and the German international was not in the squad for the away game against Manchester City and then was an unused sub in the next game and we have since then never seen him in the matchday squad.

The new season kicked off last month but Mesut Ozil is still yet to feature and Arsenal manager has now made the decision of not including him in the squads of the Premier League and UEFA Europa League for this year’s campaign. Arteta was questioned on his decision to leave out Ozil and whether it was something the board wanted but he however confirms that the German not being in the squads is solely his decision despite all the speculations on this situation.

Arsenal manager Mikel Arteta (right) speaks to Mesut Ozil from the touchline during the Premier League match at The Emirates Stadium, London. (Photo by John Walton/PA Images via Getty Images)

“What I can say from my side is it’s a football decision, that my conscious is very calm because I’ve been really fair with him. It is nothing related to any behaviour or, like I read, the pay cuts. It’s not true. It’s my decision, if someone has to blame me.” Mikel Arteta told reporters in a press conference.

“My job is to get the best out of every player, to contribute to the team. Here I feel at the moment, that I have failed. I want the best possible Mesut for the team. In some moments I was able to get close to that, and at the moment I have not been able to.”