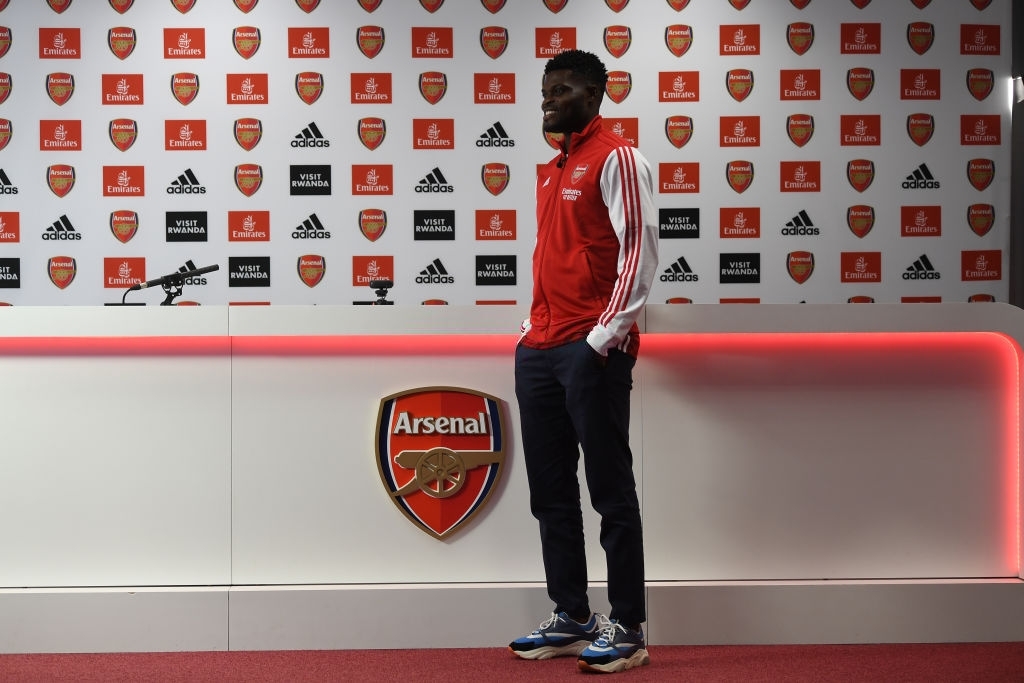 Arsenal sealed the sensational transfer of Thomas Partey on deadline day after they stunned Atletico Madrid by activating his £45m release clause.

Partey has been on international duty with the Ghana camp and he played two friendly matches against Mali and Qatar, contributing 2 assists against Qatar.

He finally flew into England on Tuesday morning for a photoshoot at London colney.

Partey has been unveiled by Arsenal. (Photo by Stuart MacFarlane/Arsenal FC via Getty Images)

“I feel so happy, I already feel part of the family because the fans have received me, everybody is saying nice things about me and, you know, to be received like this is a great feeling,” Partey told Arsenal during his first interview.

“This a great club, it is one of the biggest clubs in Europe and it is a club that deserves to be aspiring for greater things and I think it doesn’t happen in a day, we have to work hard to make sure we are back to where we belong.

“I want to make everyone feel happy.”

Thomas Partey revealed he has been a huge follower of Arsenal down the years.

“I have followed Arsenal for a long time, when we were young we used to watch so many games, when they had the Invincibles season in 2004, they were so great. That is when they won the hearts of so many people.

“There were a lot of great players [here at the club] before. Ian Wright was here, Thierry Henry, Patrick Vieira, Pires, Bergkamp was one of the greatest, and that season was great.”

The 27 year old has aimed to bring the club back to the top by winning the Premier League but admitted it won’t happen overnight.

Arsenal fans will be hoping that Arteta unleashes Partey against Manchester City this weekend.

Has Aubameyang’s form dropped since signing a new contract?

The reasons why William Saliba is yet to feature for Arsenal