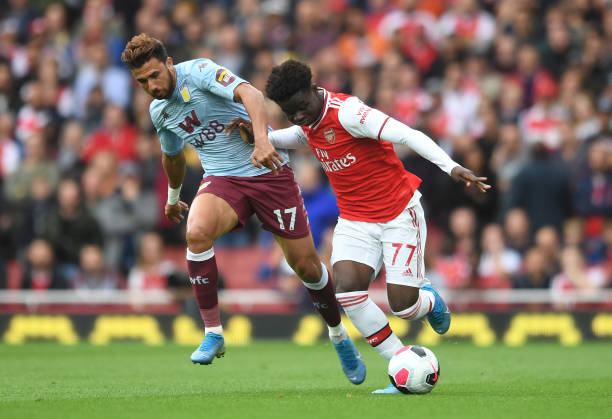 Arsenal will be hoping to continue with their winning ways when they play host to Aston Villa. Last week the they picked up a 1-0 win at Old Trafford ending their away win-less run against the big six and beating Manchester United in the league away for the first time since 2006.

On Thursday Arsenal enjoyed a comfortable 4-1 win over Molde in the Europa League, taking them to 9 points from 3 games.

Arsenal’s injury list has reduced to just four players (Martinelli, Nelson, Mari and Chambers). Mikel Arteta will have a bit of a selection headache with the return of David Luiz who was in good form before his injury while Rob Holding was excellent against Man United.

Nicolas Pepe is a serious contender on the right side after his exploits in the Europa League and had a better game than Willian who also started.

Elneny has massively improved and could now be a starter for Arsenal. (Photo by David Price/Arsenal FC via Getty Images)

Xhaka and Ceballos may have played well on Thursday but it may not be enough to dispose Elneny who put up a great performance last weekend.

Aston Villa can be a tricky side on their day they thumped Liverpool 7-2, though they’ve lost their last two games.

Level on points with Arsenal despite having a game in hand. Villa have dangerous players like Grealish, McGinn, Barkley and Watkins. Former Arsenal goalie Emi Martinez could also decide to frustrate his former side.