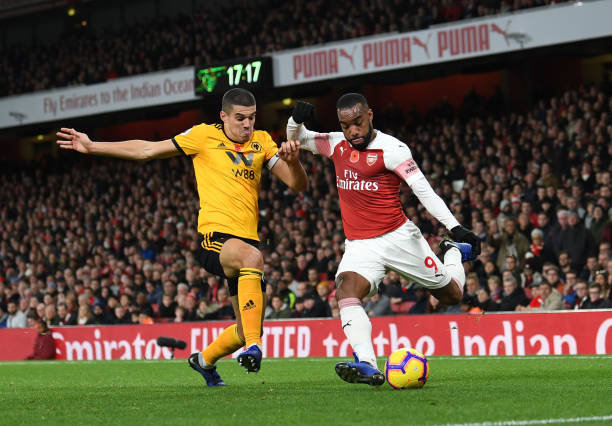 ( Arsenal Vs Wolverhampton / Photo via Getty )

Arsenal will on Sunday welcome Wolverhampton at the Emirates Stadium and they will hope to get back to winning ways in the Premier League after having failed to get a win in their last two games in the league. Arsenal boss Mikel Arteta will hope that the players will showcase the precision they showed in the UEFA Europa League a few days ago in this game.

Arsenal will come into this match with nervousness since they have been poor in the Premier League this season as they are now in the 13th position but they will still be hopeful of getting all the three points as their opponents Wolves have as well not had a good start to the 2020/21 campaign as they are just two places higher than the North Londoners.

These two clubs last met in July and Arsenal won that game at Molineux Stadium thanks to goals from Alexandre Lacazette and Bukayo Saka and so Mikel Arteta will probably want a similar performance from his boys even though they have both improved their squads in the summer transfer window. Aubameyang was used in a new role in Arsenal’s 0-0 draw with Leeds United last weekend and the fans will hope that the manager lines up like this again as it was not fully tested in that game since Nicolas Pepe got sent off in the second half.

Wolves are a great counter attacking team and so Mikel Arteta will hope that his centre backs will be able to keep Raul Jimenez quiet since he has had good games against the gunners in the past. It will be an interesting tactical battle between Nuno and Arteta as they both seem to usually have success when playing counter attacking football

Arsenal will be without Pablo Mari and Calum Chambers as they just begun trying to get match fitness before they can be put in the Premier League squad. The gunners will of course not be with Nicolas Pepe in this game as he is suspended after getting a red card in the previous league game.

Wolverhampton will welcome back their captain Conor Coady back into the squad as his isolation period is done but they will however be without Romain Saiss as he tested positive for COVID-19.