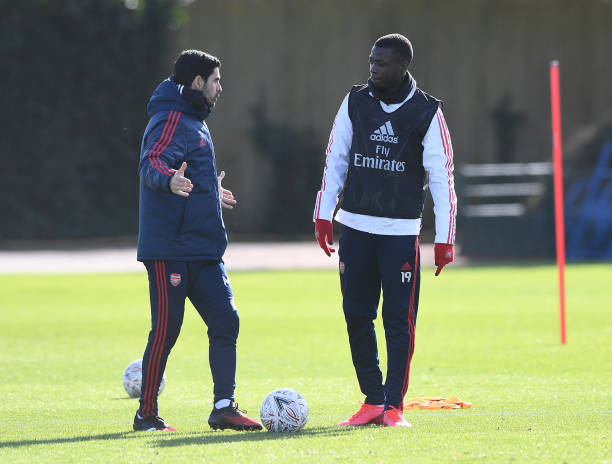 Arsenal’s £72m record signing has opened up on his limited playing time this season, admitting that he is frustrated and unhappy.

Manager Mikel Arteta has opted to start Willian ahead of him in the Premier League. With Pepe’s chances of playing limited to substitute appearances and Europa League matches.

Pepe has started only one game in the League and has scored just a single goal though he has two goal in three Europa games.

The Ivorian international hasn’t had the perfect start to life at Arsenal with mixed performances. He however contributed 18 goals plus assists last season and played a vital role in the FA cup triumph.

In a recent interview with Metro he expressed his frustration. “My goal is to play more. Have a little more playing time.

“A player who plays is happy. For me, I would like to play a little more to find a smile again.

“He [Arteta] wants me to be 100 per cent focused during the 90 minutes of the match.

“Afterwards, I see during training that I will be a substitute the following weekend. But the coach speaks to me, he also has assistants who are there for that.

“But it is frustrating for any player to be on the bench.” “The coach makes his choices. It’s up to me to show him that I don’t have that role.”

It is questionable as to why Arteta would opt to start a 32 year-old free agent ahead of your 25 year-old record signing.

Pepe is not in form and sometimes leaves fans questioning why the club spent £72m on him but neither is Willian. Besides his impressive debut, Willian hasn’t contributed much.

We will wait and see how Mikel Arteta reacts to this after the international break especially after poor performances from Willian and Lacazette in the previous game.