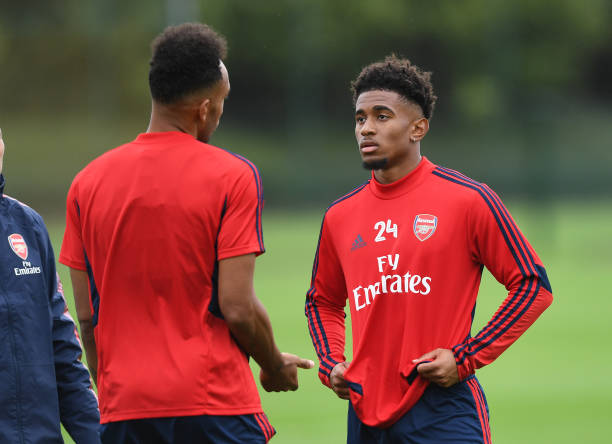 ( Aubameyang and Nelson / Photo via Getty )

Arsenal will today host Wolverhampton at the Emirates Stadium and they will come into this game determined to improve their league form since they have been heavily criticized in the last few weeks. Mikel Arteta will want to select the best starting eleven to get the win and so here’s the predicted lineup of the North Londoners with all eyes on Pierre-Emerick Aubameyang and Reiss Nelson.

Alex Runnarson made a clean sheet in the last UEFA Europa League game but Bernd Leno is Arsenal’s first choice goalkeeper and so he will be in between the goal posts today.

Arsenal showed their resilience in defence in their previous Premier League game against Leeds United as they kept a clean sheet despite playing with 10 men for most of the game. So Mikel Arteta will probably use the same back four of Tierney, Gabriel, Holding and Bellerin.

Granit Xhaka has gotten back into the squad after the injury to Thomas Partey and so he could start at midfield in today’s game against Wolves along Mohamed Elneny who just recovered from COVID-19. Elneny is expected to be immediately brought back in as he was impressive before the international break.

Nicolas Pepe received a red card last weekend and so he could be replaced by Reiss Nelson today. Mikel Arteta will start Nelson and Willian on the wings while Joe Willock plays as the central attacking midfielder as he fully deserves it after getting two assists in the match against Molde on Thursday.

Pierre-Emerick Aubameyang will start as a striker today as it was clear last weekend that Arteta has changed his mind will stop playing him as a striker.