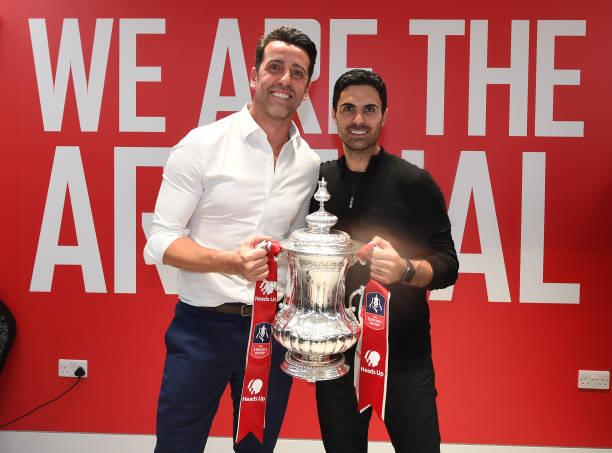 Arsenal have been poor in the Premier League this season as they find themselves in the 15th position on the table after the first 12 matches of the campaign. The poor results in the league have seen some fans start calling for the sacking of Mikel Arteta since the club has not been able to replicate last season’s form that won them the FA Cup. Arsenal’s technical director Edu Gaspar has told the fans why Mikel Arteta deserves more time.

Arsenal hoped to get back on winning ways when they welcomed Burnley to the Emirates Stadium but a poor second half performance made them lose all the three points hence putting a lot of pressure on Mikel Arteta since they don’t seem to be climbing up the table any time soon. The gunners have been poor in creating chances and Mikel Arteta has failed to fix this problem so far as they have spent a long time without scoring a goal from open play.

Arsenal technical director Edu Gaspar has rushed to the defence of Mikel Arteta saying that the Spanish coach has had to go through a lot in his first year at the club such as the time when football got paused due to the pandemic and the inability to have a proper pre-season with his squad. Edu has urged the Arsenal supporters to have more patience and give Arteta more time.

“Pre-season challenges, three months without any football matches, a lot of things changing in the club. He started, and stopped, and when he started to get an understanding of all the squad he stopped again.” Mikel Arteta told Sky Sports.

“He didn’t get a sequence to know everyone properly. It would be really unfair to Mikel to say something about that because the year was so challenging for everyone but even more for Mikel, who’d just arrived at the club.”

“Because if you have a manager who was at the club for two, three, five years, it makes that situation easier. That’s why Mikel needs always, from my side, good words.”