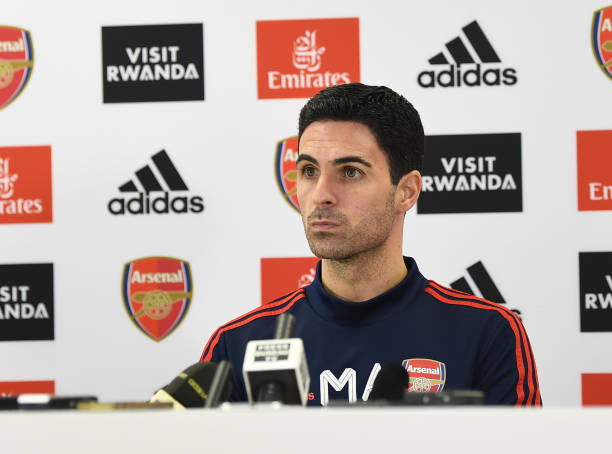 Arsenal boss Mikel Arteta and his team are on the receiving side of stick after a shockingly poor start to this season’s Premier League campaign.

Questions are starting to be asked about Arteta’s capabilities with stats showing Arsenal have regressed in the League under his reign although he led Arsenal to an impressive FA cup victory.

Arteta has been asked questions in various interviews and here are glimpses of what he has said regarding some key issues that are on the table.

Arteta on being sacked:

He talked about the security of his job and admitted he isn’t afraid of getting the sack.

“It’s something that the day I decided to be a coach I know that one day I will be sacked or leave the football club,”  Arteta said.

“I don’t know if it’s the day after I sign my contract, in a month’s time, a year’s time or six months’ time. I never worry about it.

“My only concern is to get the best out of the players, give the best possible service to the club and become better and better.

“I know, I repeat, in this profession, one day I will get the sack or leave but I don’t know when that is going to happen.”

Mikel Arteta in an interview said he is aiming to get Arsenal playing in a 4-3-3 formation but said he doesn’t currently have the right personnel in five to six positions.

In an interview with DAZN journalist Nacho Gonzalez on Saturday, translated from Spanish.

“For me the way we occupy space and who is going to move in there is more important than the formation,” he said.

Arteta has already won a piece of silverware in less than a year at the helm,

“And from there we have some very similar players that are not used to play in those positions so we have to keep changing the formation a little bit.

“We want to move to a 4-3-3 but for that, you need a lot of specificity in every position but now in five or six positions, we don’t have it.

“The aggressiveness, the effectiveness, the amount of steals we make in opposition half I think we have been very steady against some big clubs.

Arteta asks for patience and belief:

In an interview with DAZN Arteta asked for patience and time similar to what Manchester City manager Pep Guardiola got.

“At Man City in our first year, which was complicated, I saw the reaction of people around Pep, the people in the hierarchy. “They didn’t have a doubt, they knew the path to follow , this year something has happened but we are going there and the following years it was different.

“For me the most important thing when you are building a new project is that you need to be very clear in what you want to do and the people around you have to know what you want to do, believe in that and be willing to defend that for a sustainable and reasonable period of time.

“Changing to what we want has risks and the way we want to play requires a lot of precision, a lot of game plan. Sometimes it works, sometimes it doesn’t. We have been very clear where we are going and in this path there’s going to be times when the project is going to suffer.

“There we have to be stronger than ever, keep our idea and keep trying to bring the players we want, keep the players we have and evolve them. For me that’s the main secret.”

Arsenal will play Rapid Vienna on Thursday night but the focus will be on Sunday’s north London derby against Spurs who happen to be topping the table. A win on Sunday would relieve lots of pressure that is mounting on Arteta.

Could Mikel Arteta get sacked by Arsenal?