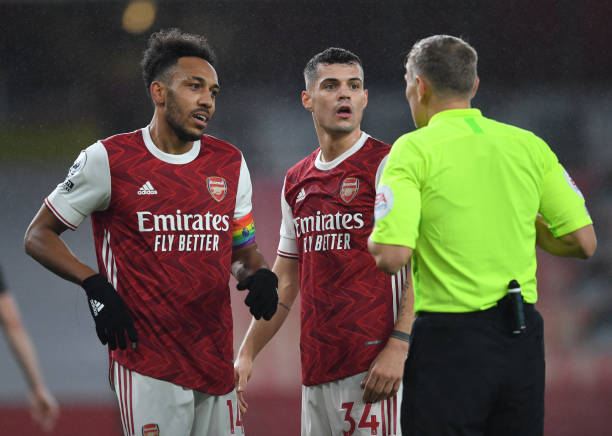 Arsenal was on Sunday beaten by Burnley 1-0 thanks to an own goal from their captain Pierre-Emerick Aubameyang but the gunners definitely felt that they would have won this game if Granit Xhaka didn’t get red carded in the first few minutes of the second half. Arsenal boss Mikel Arteta was obviously frustrated with the result and he commented on the incident that saw Xhaka get sent off.

Arsenal were not impressive in the first half against Burnley but they however had control of the match as the visitors did not get any good chances apart from the Westwood chance that almost went into the back of the net. Arsenal started off the second half with so much energy as they now started creating high quality chances but failed to convert any of them.

A foul by Granit Xhaka went from just a yellow card offense to a red card after he caught the throat of a Burnley player and the referee decided to send him off after a VAR review. This obviously changed the tide of the match as Burnley went from being desperate to not concede to now feeling that they can get their first ever win over Arsenal in the Premier League. Mikel Arteta was very frustrated with the loss and was angry with the red card that Xhaka needlessly received and he criticized the Swiss international.

“Yes, but honestly, I think it was unacceptable to do that action and the players are in a moment that they are so willing to do more and fight more and show how committed they are, to be alive in the game, that on this occasion Granit has overstepped the line.” Mikel Arteta told Arsenal Media.

“It’s another action with Mo that I haven’t seen, but it looks similar. We cannot make those mistakes because they’re the wrong approach to what we’re trying to do.”

Arsenal discover their Europa League round of 32 opponent