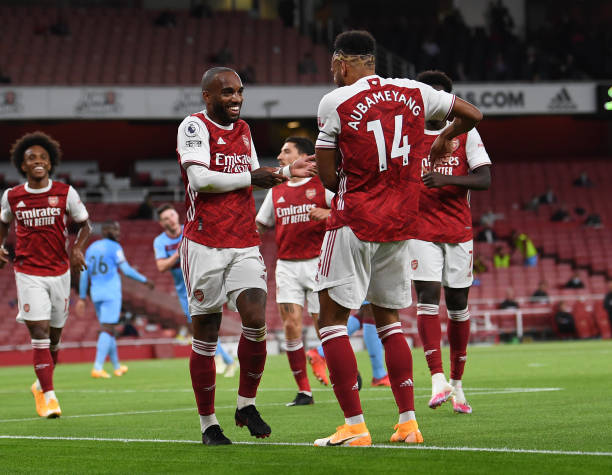 Aubameyang and Lacazette celebrate a goal together. ngland. (Photo by David Price/Arsenal FC)

Arsenal take on Tottenham at the Tottenham Hotspur stadium at 17:30 BST.

The hotly contested North London derby comes at a crucial time for Arsenal as their season appears to be falling apart.

The Gunners are having their worst start to a League campaign since 1981 with 13 points from 10 games meanwhile their bitter rivals are having the opposite. Spurs sit top of the table with 21 points.

A victory for Arsenal in this match could be the turning point for their season and reduce the pressure that’s mounting on Arteta and his boys, a defeat would be a sixth one, mounting more misery on the team.

We anticipate Arteta to switch to a 3-4-3 formation approaching the game more cautiously, a similar approach he used against Manchester United.

Lacazette is expected to return to the starting lineup after his fantastic display against Rapid Vienna. This would see Aubameyang move to the left wing with Willian on the other wing. Willian has a good record against Spurs.

The midfield pair is tricky but Arteta could drop Xhaka and opt for Elneny who would offer a little more pace, Partey remains a doubt and is unlikely to make it to the starting eleven.

The defenders and wingbacks are quite obvious though Luiz and Maitland-Niles might push for a start.

Arteta speaks about formations, being sacked and asks for patience and belief