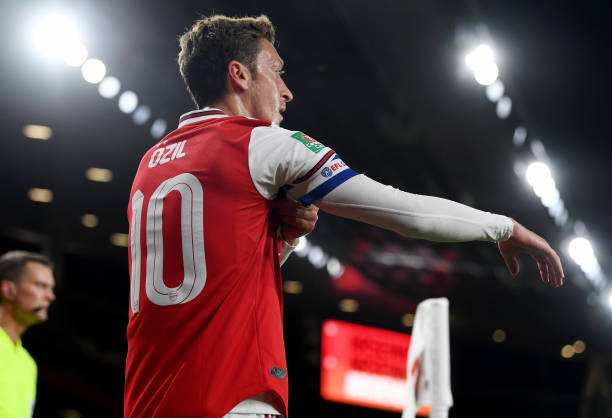 Arsenal midfielder Mesut Ozil was heavily linked with a move away from the Emirates in the summer transfer window but he however stayed and entered the final year of his current contract. There’s a bit of admission in the Arsenal fanbase that Ozil will only leave once his contract ends in July but a new report says that he could leave as early as next month.

Mesut Ozil has over the years been linked with a move to Turkish clubs such as Fenerbahce and these rumours have intensified in the last few months after it was finally announced that Mikel Arteta had decided not to register the German international in his Premier League and UEFA Europa League squads for this season. It is well understand how Arsenal are desperate for Mesut Ozil to leave so that their wage bill is relieved as he is one of the most highly paid players in the league.

Fenerbahce congress member Murat Zorlu has come out with a rather surprising statement as he has as per Sport Digitale said that he has been told that the 32 year old World Cup winning midfielder would be joining them in the upcoming January transfer window which is a big surprise as its widely believed that he will leave in July when his contract at Arsenal expires.

“A source, who’s very well connected to the club has told me that Mesut Ozil is likely to become a Fenerbahce player during the next transfer window. I would say 90% he will join us in one month.” said Zorlu.

Arsenal will be required to submit new squads at the start of 2021 for the reminder of the season and it will be interesting to see if Mesut Ozil will be brought back to the squad or if he is indeed heading to Fenerbahce after having spent eight years in England with the North Londoners.

Report: Arsenal board reveals the type of player they will sign in the January transfer window