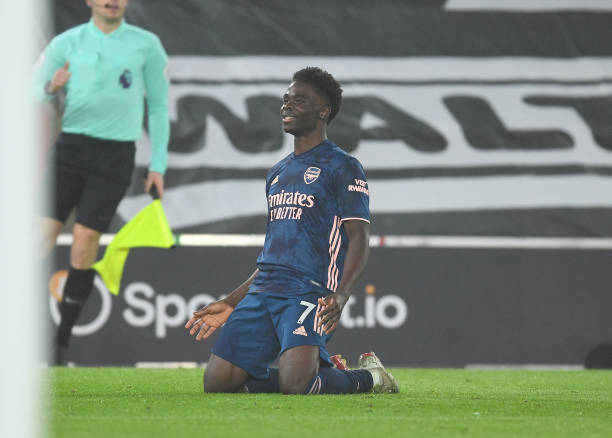 Arsenal was on Tuesday night welcomed at the St Mary’s Stadium by Southampton and the gunners won the game 3-1 thanks to goals from Alexandre Lacazette, Nicolas Pepe and Bukayo Saka. Saka scored a goal and also made an assist in the game and the youngster has spoken out on what he told Alexandre Lacazette before their game against Southampton.

Arsenal youngster Bukayo Saka has been so impressive in the last few weeks as he has continually scored and assisted for the gunners and it was the same for last night, as Saka scored a brilliant goal against Southampton after getting set up by Alexandre Lacazette in the middle of the pitch. Saka ran towards the penalty box of The Saints after being put through by Lacazette and scored Arsenal’s second goal of the day which then helped to settle well into the game which they ended up winning 3-1.

Bukayo Saka also repaid the assist by also setting up Lacazette in the second half who scored the third to secure the three points for the North Londoners. Saka faced the press after the game and revealed what he had told Lacazette before the game, as it helped in him scoring Arsenal’s second goal against Southampton.

“I spoke to him before the game about the opportunity, as soon as he gets the ball, I’m going to run in behind & he listened! We got a goal so I was happy with that” Bukayo Saka told BT Sport.

Bukayo Saka also heaped praise on Cedric who passed to him the long ball which he then crossed to Lacazette to score the third goal.

“It was amazing! He just hit the space. I don’t even think he looked at me! I’m really happy with everyone, not just Cedric & Laca, everyone put in a shift & we’re so happy to get the three points here.”