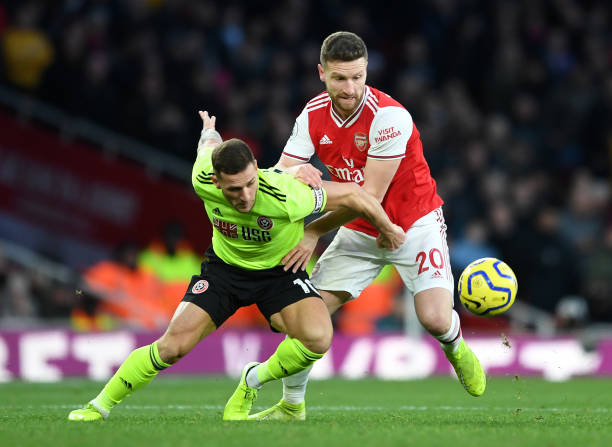 Arsenal signed Shkodran Mustafi in the 2016 summer transfer window for a fee reported to be around £35million and he has been such an unpredictable player as he sometimes had a great consistent runs of good performances to only later begin start making silly mistakes. There has been a lot of speculation on Mustafi’s future in recent and it looks like it has taken a twist.

Shkodran Mustafi made his way back into the Arsenal team in the last months of last season under Mikel Arteta as he had earlier been sidelined by Unai Emery after refusing to leave the club in the 2019 summer transfer window and he had a great number of fantastic performances under the new manager with some starting to urge the club to renew his contract but he however then later got injured in the FA Cup semi final game against Manchester City.

There has been reports that Arsenal might consider renewing the contract of Shkodran Mustafi in recent months but there has been a new twist as a report by Football.London has confirmed that the German centre back is now in talks with the club to try to terminate his contract like Sokratis and Mesut Ozil did so that he could go to a club of his choice on a free transfer. The report claims that Mustafi believes that his long-term future might not be at Arsenal as he is way down the pecking order of Mikel Arteta as he didn’t even manage to make it to the squad that traveled to Southampton for the FA Cup fourth round game.

It is not known where Shkodran Mustafi would move to but the above report says that the 28 year old has attracted interest from both Germany and Italy. Mustafi leaving would be a good ending to the big clear out that Edu Gaspar set out to do in this transfer window to trim the squad as Arteta requested.

Revealed: The time Arsenal will announce signing of Martin Odegaard