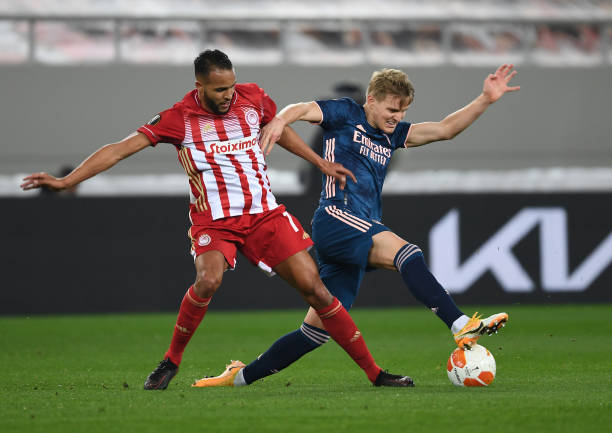 Martin Odegaard has been regularly in the Arsenal starting eleven since he made a loan move from Real Madrid to Arsenal and he was once again in the squad that Mikel Arteta used against Olympiacos on Thursday, and the Norwegian international didn’t disappoint him as he got his first goal for the gunners in remarkable fashion. The 21-year-old has spoken out on his goal and the general team’s performance.

Arsenal got off to a good start in their match against the Greek side and created a couple of chances with even Martin Odegaard coming close to getting on the score sheet but Olympiacos regained confidence after those first nervous minutes first them and started making Arteta’s men make mistakes that could be costly.  Martin Odegaard was however able to bring the game back into the control of Arsenal after he scored a stunning goal thanks to his incredibly powerful shot from outside the box.

Martin Odegaard was obviously overjoyed after the game and opened up about how that was a very important goal for him as he was very eager to get on the score sheet.

“It was a great moment. I was eager to get on the scoresheet and I didn’t get any goals yet, so it was a good moment for me and also a crucial moment in the game to get a goal away from home and take the lead into half-time. It was a big moment for me personally and also for the team.” Martin Odegaard told Arsenal Media.

PIRAEUS, GREECE – MARCH 11: (L) David Luiz and (2ndL) Dani Ceballos celebrates the 2nd Arsenal goal, scored by Gabriel during the UEFA Europa League Round of 16 First Leg match between Olympiacos and Arsenal at Karaiskakis Stadium on March 11, 2021 in Piraeus, Greece. Sporting stadiums around Europe remain under strict restrictions due to the Coronavirus Pandemic as Government social distancing laws prohibit fans inside venues resulting in games being played behind closed doors. (Photo by Stuart MacFarlane/Arsenal FC via Getty Images)

Arsenal ended the first half while leading by one goal but they however went on to concede in the second half due to a mistake from Bernd Leno and Dani Ceballos. The gunners still got the win as two goals from Gabriel and Elneny in the second half helped them to get a 3-1 win over Olympiacos.  Odegaard spoke out on how they recovered the game showed how they’ve a great character.