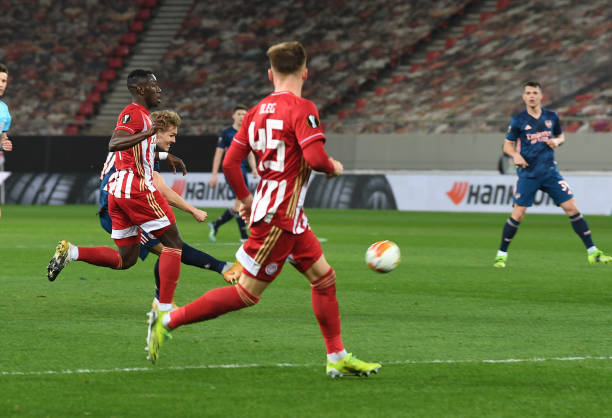 ( Olympiacos Vs Arsenal / Photo via Getty )

Arsenal was today welcomed at the Karaiskaki Stadium for their UEFA Europa League round of 16 match against Olympiacos and they beat the home side 3-1 thanks to goals from Martin Odegaard, Gabriel and Mohamed Elneny.

The gunners started the game very well as they immediately attacked the home side and both Martin Odegaard and Pierre-Emerick Aubameyang came close to getting on the score sheet. Even though Olympiacos tried to settle after those scaring first minutes, Arsenal’s pace was still too hard to contain for them as Bukayo Saka won the visitors many free kicks which were taken by David Luiz and Aubameyang, but none got past the goalkeeper.

Olympiacos were very willing to go forward when they had the ball but their best chances seemed to be when the gunners made a mistake, as they came close to opening the scoring when Odegaard lost the ball but Bernd Leno swiftly took care of the shot.

Martin Odegaard opened the scoring for the North Londoners with an outrageous shot which proved to be too powerful for the goalkeeper to stop hence entering. Olympiacos tried to get back into the game but failed even though they almost got gifted a goal by Arteta’s defence hence ending 0-1 in favour of the visiting Arsenal side.

Arsenal started the second with the same hunger for goals as in the first half and Thomas Partey tried a long range shot but it however went over. Arsenal boss Mikel Arteta then a few minutes later decided to sub off Thomas Partey to possibly rest him but this back fired as Dani Ceballos who replaced the Ghanaian international was involved in a mistake that gifted Olympiacos the equaliser.

Dani Ceballos failed to control a pass from Bernd Leno and then the ball got stolen by El-Arabi who scored to make it 1-1 in the 58th minute. This goal seemed to have triggered the gunners as Olympiacos gained a lot of confidence and started creating chance after chance.

The gunners intensified their search for a goal in the last 20 minutes of the game but the home side tried its best at keeping them out by giving them no spaces to exploit. A well organized corner kick saw Willian send a whooping cross to Gabriel who made it 2-1 for the North Londoners. Mohamed Elneny who had just come on got Arsenal’s third with a stunning shot to make it 3-1 to safeguard Arteta’s win away in Greece.

The match ended 3-1 in favour of Arsenal and Mikel Arteta was definitely proud that his team got this important away win.

Arsenal 1-2 Chelsea: Defeat at the Emirates as Partey picks up an injury

Manchester City 1-0 Arsenal: All you need to know