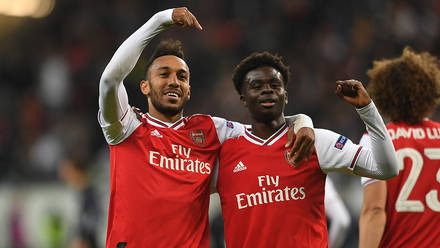 The UEFA Europa League returns to the Emirates Stadium on Thursday with Arsenal welcoming Villarreal to London for their second leg encounter after the first leg ended in a 2-1. Arsenal manager Mikel Arteta will hope to use his best lineup for this game as this is their most important game of the campaign and so here is the expected starting eleven with all eyes on Pierre-Emerick Aubameyang and Bukayo Saka as they are the most likely to make a difference.

Arsenal manager Mikel Arteta tried Maty Ryan at the weekend in the game against Newcastle United in the Premier League but it is very likely that Bernd Leno will still start ahead of the Australian international.

Kieran Tierney hasn’t featured for the gunners for a long time but he is likely to be thrown into the game today as its such an important game that needs him. David Luiz could as well be put into the starting eleven and be partnered with Gabriel Magalhães.

Granit Xhaka has played at left back in the last few games but he could be moved to the central midfield role and be partnered with Thomas Partey since they had started forming a great chemistry.

Nicolas Pepe and Bukayo Saka will start on the flanks since they’ve been impressive throughout the whole UEFA Europa League campaign and Martin Odegaard will start ahead of Emile Smith Rowe since he might have more experience.

Arsenal striker Pierre-Emerick Aubameyang will lead the line for the gunners today as Mikel Arteta will likely not start Lacazette when the Gabonese international scored a goal at the weekend.