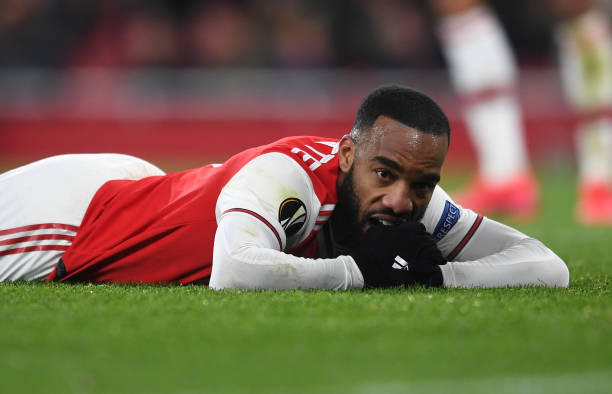 Arsenal striker Alexandre Lacazette hasn’t been heavily linked with an exit from the Emirates Stadium this summer but it is still likely that he might be sold as Mikel Arteta has promised a major shake up of the squad. It’s now being reported that the gunners might have identified the perfect replacement for Alexandre Lacazette.

Alexandre Lacazette was Arsenal’s top scorer last season but the gunners are still yet to decide whether they want to offer him a new deal as he is already 30 years old with just a year remaining on his current contract. The gunners will be forced to sell him this summer if they don’t offer him an extension since they won’t risk losing him for free and so Arsenal would then need a replacement as his goals last season were valuable due to Aubameyang being off form.

JUVENTUS STADIUM, TURIN, ITALY – 2021/03/24: Andre Silva of Portugal looks on during warm up prior to the FIFA World Cup 2022 Qatar qualifying football match between Portugal and Azerbaijan. Portugal face Azerbaijan at a neutral venue in Turin behind closed doors to prevent the spread of Covid-19 variants. Portugal won 1-0 over Azerbaijan. (Photo by Nicolò Campo/LightRocket via Getty Images)

It’s reported by The Transfer Window podcast that Arsenal will sell Alexandre Lacazette and that they will hope to use the funds raised from his sale to sign Eintracht Frankfurt striker Andre Silva who is valued at £34million. They claim that Arsenal have already begun talks with the German club over the signing of Silva this summer and that they will hope to do so before the transfer window ends.

Andre Silva is an incredible striker that has been impressive in the German Bundesliga for some time now as he even scored 28 goals including five assists there last season. The gunners have been pretty busy in this summer transfer window and it has looked like most of their focus is at the back & middle, and so it’s likely their striking search could pick up pace later.

Arsenal close in on the signing of highly rated Sambi Lokonga