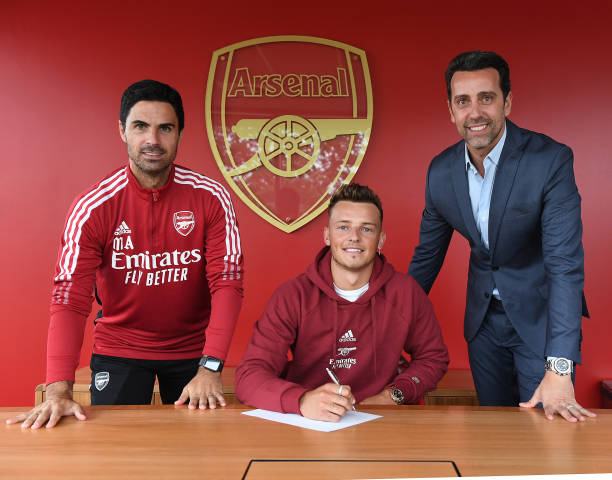 Arsenal announced the signing of Ben White from Brighton & Hove Albion on Friday in the afternoon after many weeks of waiting as the two clubs had reached an agreement over the £50million fee some time back. Arsenal’s new signing Ben White has opened up about whether he needed to be convinced by technical director Edu Gaspar and Mikel Arteta, and on what the fans can expect from him.

Arsenal’s announcement of the signing of Ben White had to be delayed for weeks because the Englishman had gone for a holiday after The Euros but he has now been finally been confirmed as a gunner and the player recently had one on one interview with the club after putting pen to paper to his contract with the North Londoners.

Mikel Arteta and Edu Gaspar spearheaded the signing of Ben White and the centre back was asked whether he needed convincing from them to sign for the gunners but he however claimed that he liked the vibes he got from the boss, and that he didn’t need a lot of convincing as he was also happy to come to the Emirates Stadium.

“I don’t think I needed too much convincing to be fair. Obviously Arsenal speaks for itself and I spoke to the gaffer a number of times during the summer.” Ben White told Arsenal Player.

“I got good vibes and the way the gaffer wants to play, I think I can produce quality in this team and hopefully get Arsenal back.”

Arsenal made signing a new centre back in this summer one of their main summer transfer priorities and now they’ve got Ben White and the player has revealed to the fans on what they should expect from him.

“It’s always a hard question, this one. When times get hard in games, I can step up and control situations. I’m very relaxed on the ball and through that I can produce quality in bad moments of the game.” said Ben White.