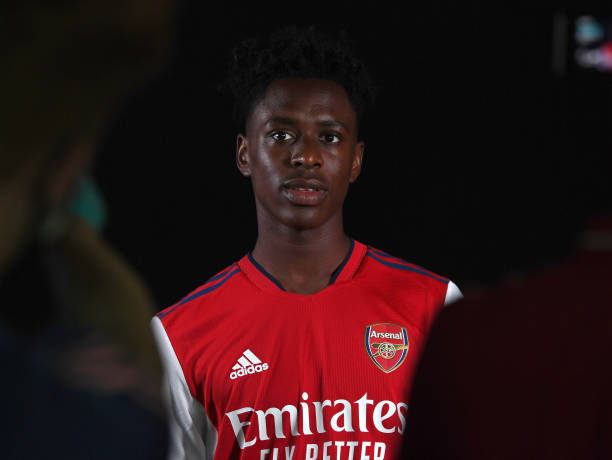 Arsenal started off the week on Monday with the announcement of signing Sambi Lokonga for €17.5million from Belgian top side Anderlecht, becoming the second player that the gunners have so far brought to the Emirates Stadium this summer. The 21 year old had his first interview as a gunner and he has sent a message to Arsenal supporters that he will soon meet.

Sambi Lokonga has finally joined Arsenal after many weeks of speculation on if the gunners would be able to match the asking price of his club but they however managed to get the deal over the line and bring the highly rated midfielder to North London. The Arsenal fans will be looking forward to see him on the pitch since they have had a lot about him and how he has a lot of potential of becoming an outstanding player.

Sambi Lokonga faced the media after the paper work of his move to Arsenal was done and he claimed that this move was a very huge move for him since he was going to a foreign league for the first time in his career but he also sent a message to the fans who want to know the positions that he is able to play.

“It’s a big move because I have been playing for Anderlecht for 10 years so it’s going to be my first big move to another country,” he told Arsenal Media.

“It’s a big step, but I feel confident because we have to be. In the football world, you have to feel confident about yourself, but I’m looking to play in this league and I can’t wait to start.”

“I can play both. I can play as a six and I can play like a box to box, but people say that I’m better in the six position.” said Lokonga when asked about positions that he plays in.