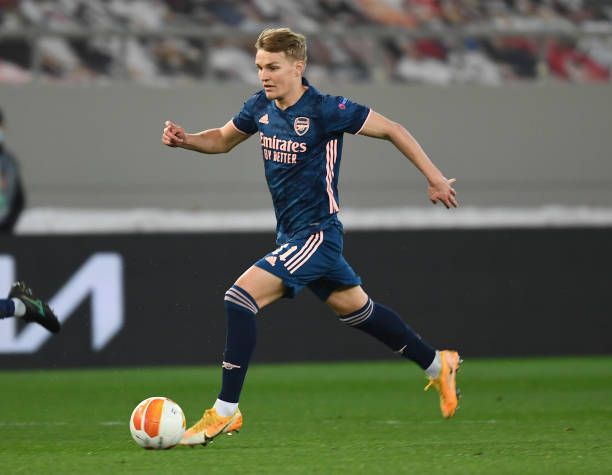 Arsenal will today face West Brom Albion at the The Hawthorns in the Carabao Cup second round and this will be a game that the North Londoners hope to win as it will be embarrassing to lose all three of their opening matches of the season. And so we are now going to take a look at the lineup that Arsenal is likely to use against West Brom with all eyes on Martin Odegaard and Pierre-Emerick Aubameyang.

Arsenal goalkeeper Bernd Leno is the first choice goalkeeper but he will be benched tonight as Arteta will want to give a debut to Aaron Ramsdale who arrived at the club in this summer transfer window.

Arsenal new signing Nuno Tavares is likely to get his first competitive debut in today’s game in the left back position with Holding and Mari in the centre back slots while Hector Bellerin returns to the starting eleven. The club said in its team news that he is likely to be available.

Arsenal’s new youngster signing Sambi Lokonga has played in the two first games of the season and so he could be rested hence Mohamed Elneny playing for the first time this season as a midfield duo with Granit Xhaka.

Bukayo Saka is one of the most important players at Arsenal and he struggled in the previous game, and so Arteta might start him today hoping he gains confidence. Martin Odegaard could get his debut in today’s game against West Brom and Reiss Nelson has been waiting a long time for another chance in the first team.

Pierre-Emerick Aubameyang got a few minutes on the pitch in the game against Chelsea and so he will likely play against West Brom Albion.