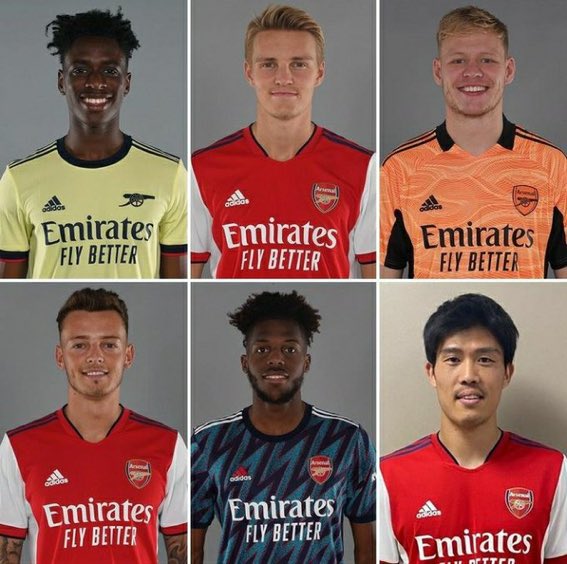 Arsenal was one of the busiest clubs in the 2021 summer transfer window and it ended when they have made six signings to bolster their squad for the 2021/22 campaign. Arsenal finished outside the Premier League top six last season and so we are going to take a look at how the North Londoners can lineup with all six of their new signings.

Arsenal have in this summer transfer window completed the signing of Nuno Tavares, Sambi Lokonga, Ben White, Martin Odegaard, Aaron Ramsdale and Takehiro Tomiyasu and so we are going to take a look at how the gunners will lineup with all these players.

ARSENAL LINEUP WITH ALL SIX SIGNINGS

Arsenal signed Aaron Ramsdale from Sheffield United on a big fee and they will be hopeful that he will provide enough competition for Bernd Leno who has been a bit too comfortable after the departure of Emiliano Martinez.

Nuno Tavares was signed to be Arsenal’s back up left back but he will have hard time than the other new signings to get minutes since his competition is Kieran Tierney.

Arsenal defender Ben White is a signing that the fans are praying works because they have for long cried for a competent centre back and they hope that they have finally hit the jackpot. All eyes will be on him after the international break.

Arsenal had Martin Odegaard on loan last season and he was impressive hence the club deciding to permanently sign him in this summer transfer window. Arteta is a huge fan and so he will have a crucial part in the season.

Arsenal completed the deadline signing of Takehiro Tomiyasu from Serie A because the club was going to lose Hector Bellerin and its likely he will become a regular as he was deemed a good signing for the gunners by Italian football pundits.

Sambi Lokonga is a signing for the future that the gunners decided to do but he could immediately get significant action this season due to injuries at the club.

Arsenal have made a big transfer mistake despite spending over £150m