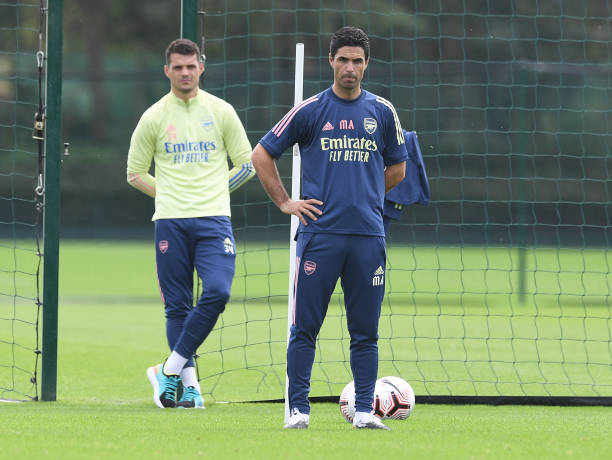 Seven Premier League games have been enough to show where Arsenal’s weaknesses lie.

Mikel Arteta started to register positive results once he had all key players and new signings at his disposal, particularly there was an improvement in the team’s defensive play.

However, Arsenal have shown deficiencies across all their games this season in aspects such as; creating goal scoring opportunities, transitioning between midfield and attack and converting big chances in the final third among others.

Here are the two areas that need to be addressed and may only be worked upon by bringing in new personnel.

Granit Xhaka’s knee injury is set to rule him out of action until January leaving Arsenal with only one reliable central midfielder in Thomas Partey.

Granit Xhaka has been ruled out for up to three months. (Photo by Stuart MacFarlane/Arsenal FC via Getty Images)

Mohamed Elneny lacks consistency and just isn’t good enough to be a regular starter for Arsenal while new boy Albert Sambi Lokonga has impressed so far but he is still finding his feet in a new league.

Besides lack of quality options and the fact that Partey and Elneny will be unavailable for over four weeks due to the Africa Cup of Nations tournament in January, the need for a dominant midfielder was evidently seen in the Brighton game as the Gunners were dominated in the middle of the park by a Brighton side that were without their main midfielder Yves Bissouma.

None of Arsenal’s forwards have shown consistency this season. In terms of bringing in goal returns Pierre-Emerick Aubameyang was the man to rely on but not anymore.

Most of the forwards are young and yet to reach their potential, the mature player that was expected to be relied on is Nicolas Pepe but he hasn’t shown consistency the top level requires.

Lack of attacking cohesion is one of the reasons why Arsenal have struggled this season. (Photo by David Price/Arsenal FC via Getty Images)

Arsenal must sign a forward in the next transfer window that is capable of scoring and creating goals. This could be a winger or a striker that will replace Arsenal’s aging strikers.

The Gunner’s have scored just five goals in their seven Premier League games, the lowest in over three decades.