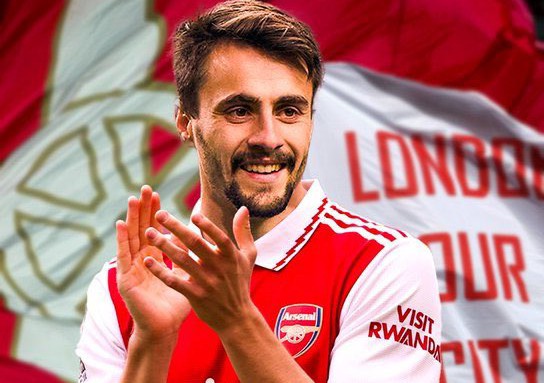 Arsenal have today finally announced the signing of Fábio Daniel Ferreira Vieira on all their social media platforms and he joins the gunners from Porto on fee reported to be around €40million with add-ons as per many reports. Fabio Vieira becomes Arsenal’s second signing of this year’s summer transfer window after Marquinhos who joined the gunners from Brazil some time back.

Fabio Vieira comes to Arsenal at the right time as the supporters have for long been calling on the club to improve their midfield since it seemed to be way worse than the one of their Premier League Big Six rivals. The fans will hope that Fabio Vieira will quickly adapt to the Premier League as his fellow national teammate did, Bruno Fernandez of Manchester United.

Fabio Vieira is likely to join up with the Arsenal squad that will play in the pre-season matches and most of the fans will be looking forward to those matches as they will get a chance to get a glimpse at the potential of the Portuguese midfielder.

The 22 year old will provide the necessary competition to the likes of Emile Smith Rowe and Martin Odegaard so that they don’t get too comfortable as Mikel Arteta has said he values competition a lot. Arsenal technical director Edu Gaspar had this to say about the arrival of Fabio Vieira.

“We’re so pleased to have completed the signing of Fabio from FC Porto. Fabio is a player with special qualities who is comfortable with the ball in the final third of the pitch. We are all looking forward to working with him and enjoying his future contribution to Arsenal.” said Edu Gaspar.

“We will now continue to work hard and are looking forward to finishing this transfer window as strongly possible.” Please click here to watch the full interview with Edu.”

Arsenal make an interesting decision on their pursuit of Youri Tielemans