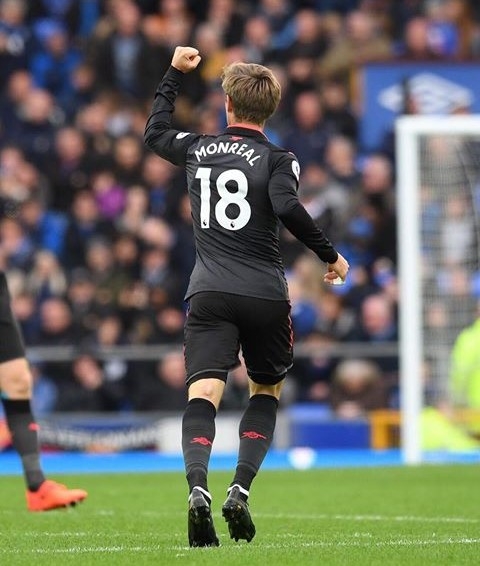 The gunners beat Everton today thanks to goals from attacking players alongside the equaliser by defender Nacho Monreal who is the one that brought back the breaths of gooners who were very disappointed after the toffees midfielder Wayne Rooney had scored a spectacular goal due to a poor mistake from the Arsenal defense.

Hector Bellerin was very impressed with the performances of the fellow Spaniard and says that this might be the best year for the left back, says that he is happy that his compatriot is scoring goals these days. Here is what the right back said;

“It’s a bit of a change in position for him, but I think it suits him a lot and now that he’s got all the experience he’s got, he’s started scoring goals. So I’m really happy for him”. Bellerin told arsenal.com

Nacho Monreal has been performing well in the past few weeks and it seems that he is starting to get used to the centre back position which Arsene Wenger has been using him in these days after the signing of Sead Kolasinac in June.

Arsene Wenger captured Sead Kolasinac this summer after most gooners had started complaining that Nacho Monreal was getting too old and the French manager heard their wishes, and then got the Bosnian international whom the fans have nicknamed The Tank due to his energetic body. It seems Wenger didn’t want to be benching the left back and decided to convert him to a centre back which has started paying off.

Hector Bellerin says that Nacho Monreal is a great player and a good friend who he adores so much, the player continued and said that;

“He’s just a very cool guy, not like the normal footballer that people think of. A very good professional who takes care of himself a lot and it shows on the pitch.” the right back told arsenal.com.

Nacho Monreal was very outstanding in the September month and his performances were rewarded by being named Arsenal player of the month (Sept).

Pep Admits Something Gunners Would Love

Arsene Wenger Gives Out His View On Today’s Match