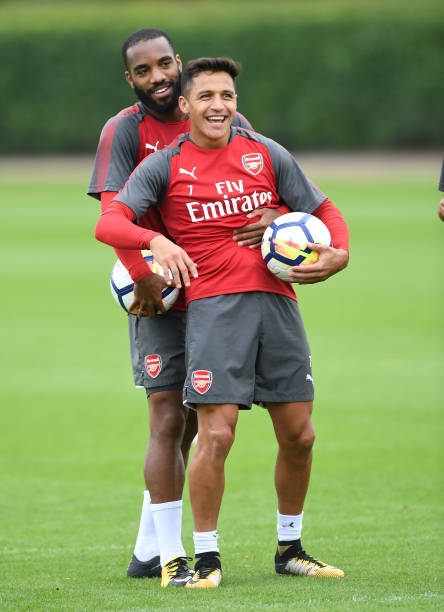 Arsenal signed Alexandre Lacazette last summer on a record Arsenal fee as he became the most expensive player to ever be bought by the gunners. The French striker has been speaking about his experience at the club and he has singled out some players that influenced him to join the North London club.

“That’s also one of the reasons why I wanted to come to Arsenal – to play with players of [Alexis’] calibre. Just seeing him in training, I like the way he plays and his mental attitude. His approach makes me want to play alongside him – hopefully for many years.” said Lacazette. ( arsenal.com)

The duo have started making a great combination and were very good and impressive in the gunners match against Brighton & Hove Albion where they formed great chances through out the whole match.

Alexandre Lacazette has been a great signing so far as he has already scored four goals this season and the gooners will be hoping that he continues the good form he has already showed because there were concerns that the player could not fit well in the gunners playing style. The former Lyon star has said that he has that he has found the English Premier League more difficult than the French Ligue one.

“The main difference is that the game is a lot more physical. The pace of the game is also very different. I now really understand what it means to play box-to-box. ” said the Frenchman. (Info – arsenal.com)

This season is an important season for Arsene Wenger to deliver some result and win some important trophies, so that is why the French manager broke the bank to get Alexandre Lacazette.

Alexis Sanchez and Alexandre Lacazette is a top combination the gooners will be hoping prospers and develops to become one of the most dangerous attacks in the EPL and there are some good signs which show that these two are starting to get used to each other. Alexandre Lacazette says he has found it interesting and needing hardworking in order to be among the best in the English Premier League.

“Things can move so fast that you don’t have time to catch your breath or think about the next move. As I said, though, the main difference is that the game is much more physical.” (info – arsenal.com)

The gunners have heard great players from France who have become legends like Thiery Henry who has been in the hearts of gooners for a long time because they have never found a great replacement for him.

Arsenal have started the season on a very low note as they have won four of their past 7 EPL matches and gooners all over the world have started getting afraid that their team may not even be able to get into the top four and then finish the year without Uefa Champions League football which is frustrating for sponsors. The Arsenal supporters have for long been begging Arsene Wenger to begin the attacking trio of SANCHEZ-OZIL-LACAZETTE together at the same time but they may have to wait a little longer to witness that because Mesut Ozil is currently injured while even Alexis Sanchez has been left out of Chile national team football team due to an injury.

Mustafi Update On His International Duty