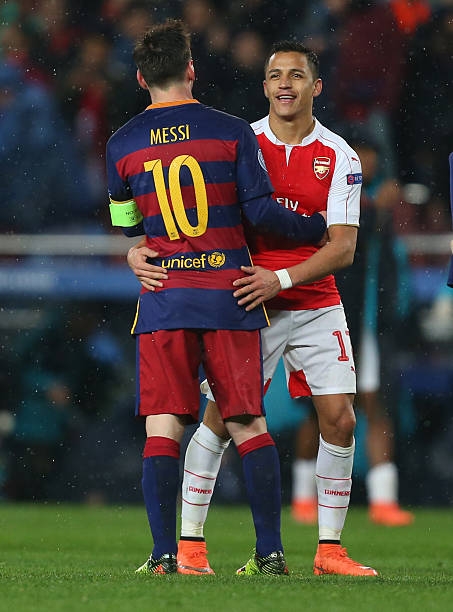 Arsenal star Alexis Sanchez and Lionel Messi were once teammates in Spain at Barcelonna. The pair are known to be good friends even though they are currently in different European clubs but there is some reports that are saying that Alexis Sanchez has been advised by football world great Lionel Messi to try and make a push away from Arsenal to join PSG in January in order to be reunited with Neymar according to a report by the EXPRESS.
Alexis Sanchez has been heavily linked with a move away from Arsenal for some months now as they are various reports saying that the Chilean is ready to quit the Emirates stadium in January because he has found the gunners to be a club that does not have an ambitious mind to win important trophies. It is said that Lionel Messi understands that the Catalans will not try to sign the 28 year old because they already have football super stars in their current club so getting the Chilean international would be a waste of money so the Barcelona star believes his old friend deserves a better club than Arsenal and has advised him to join the French giants PSG.

Alexis Sanchez has refused to put pen to paper to a new contract to extend his stay at the Emirates stadium and there aren’t and sign that negotiations have started or about to begin because both the club and player are silent on that issue. Arsene Wenger on the other hand has been calming the supporters and give them some hope that he will not let go of Alexis Sanchez in January because it is always hard for a team to get a quick time perfect replacement for an important player that leaves. The Chilean is currently in the last months of his contract at Arsenal per the current contract terms.

The gunners reportedly denied Alexis Sanchez the chance to join Manchester City in the summer yet the citizens had a bid accepted by Arsenal but is said that the deal was cancelled off because the gunners had failed to get a suitable replacement in time according to some reports in England. There was eben some reports which suggested that the Chilean had threatened to never play for Arsenal again buy that is all in past tense because he is playing and even looks happy at the club so no one knows if he will follow the advise given to him by his old friend Lionel Messi.