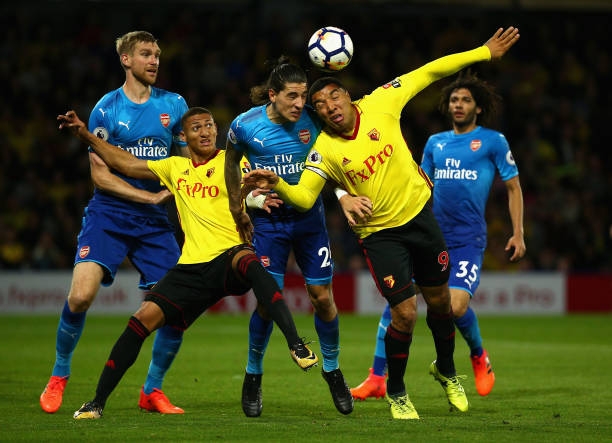 The gunners were in action yesterday as they faced Watford hoping to keep up the pressure on the top four but Arsenal were instead defeated by the hornets who beat them 2-1 in the last minutes of the match. Arsenal Per Mertasacker was given his first English Premier League start for the first time in a while and he repaid the trust Arsene Wenger gave him by scoring a great header goal in the first half of the match.

The Arsenal captain was given a start because Shkodran Mustafi got injured in the international break so Arsene Wenger had no option but to start the 34 year old. Per Mertasacker was very disappointed with the end result of the match and here is what he had to say;

“I’m not sure, I cannot tell. Honestly, it’s so quick these actions, it’s difficult to judge and the referee made that decision. I think for us it was kind of a wake-up call, but it wasn’t loud enough.” said the Arsenal captain.(INFO- arsenal.com)

Most gooners agree with their captain that it wasn’t a penalty and say that the poor officiating of the referee costed them all the three points leaving them defeated and stressed out as Arsenal supporters plan to begin protests again.

Per Mertasacker scored his first English Premier League goal for Arsenal after 1400 days since he last scored in EPL. The German international has been named the Arsenal captain for this season and even the previous one so the player is wishing to win the English Premier League before he retires from club football next year. The defender says that the 2nd half was very hard for them as they failed to push forward and put pressure on the hornets who came with fighting spirit.

“I mean obviously it’s important, but if you want to make the difference on the pitch, you know in the second half even myself it was difficult to push. I have to do better next time, that is my target, to push these guys more that we get more out of that when we get the ball.” said the captain. (INFO – arsenal.com)

The gunners looked very blunt in attack and that led to the Watford players outcompeting them making the gunners go back to defend and then finally made the mistake that finally gifted the hornets a penalty that changed the whole match.

Most Arsenal supporters were very disappointed with their manager for starting Per Mertasacker in a very competitive match because they opted for Rob Holding who is still young and vibrant and believe that he could have even performed much better in that match even though Per Mertasacker is the one who scored Arsenal’s goal.

Reactions On The Arsenal Lineup