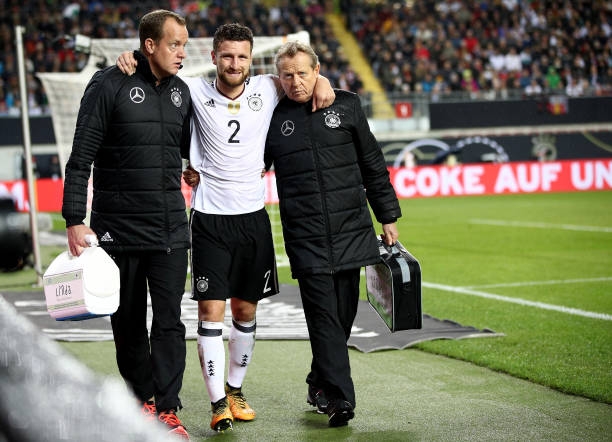 Arsenal defender Shkodran Mustafi has got injured while on international duty when the Germans took on Azerbaijan. This is the first bad news the gunners have so far got in the international break and it is very grave bad news because it is a first team regular player who is said to have sustained a thigh injury according to the Daily Star.

Arsenal supporters will eagerly be waiting for the official announcement from Arsene Wenger on whether the injury of the German international was severe of it is just a minor that will keep the player out for a few days or weeks. This will be a huge set back for Arsenal because their defense had started to improve on their performances.

Arsenal are a team that has always been affected by injuries in the past seasons and this factor has been one of the reasons the gunners have failed to win the English Premier League in a decade now because they always lost an important player at a vital time of the season. The gunners have got few options to cover for Shkodran Mustafi because the only candidate is Rob Holding because you cannot expect captain Per Mertasacker to play weekly.

Arsene Wenger will now have to try and play his cards right if the injury of Shkodran Mustafi is severe, it now seems and almost certain that the German international will miss the gunner’s match against Watford on Saturday.

Analysis: Who Should Replace Injured Mustafi

Round Up Of Today’s Arsenal News