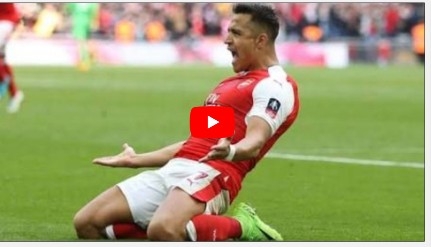 The gunners are facing Everton today as they hope to wash off the embarrassing 2-1 defeat to Watford last weekend. Arsenal have been facing the. toffees for decades now and it’s now a popular fixture amongst English people and gooners worldwide, so we thought that Arsenal supporters would wish to see the video highlights of the previous match they had with Everton in the past.

The last time these two clubs met was on the 21st of May, 2017 and the end results of that match were 3-1 in favour of Arsenal thanks to goals from Alexis Sanchez, Hector Bellerin and Aaron Ramsey.

CHECK OUT HIGHLIGHTS BELOW.

The gunners are going into this match hoping for a win and nothing else because they don’t wish to be left behind a lot because they still have a limb of faith for battling the other clubs above them for the English Premier League. It seems this is gonna be an interesting EPL campaign because even highly rated clubs this season are losing like Manchester United who were defeated yesterday.