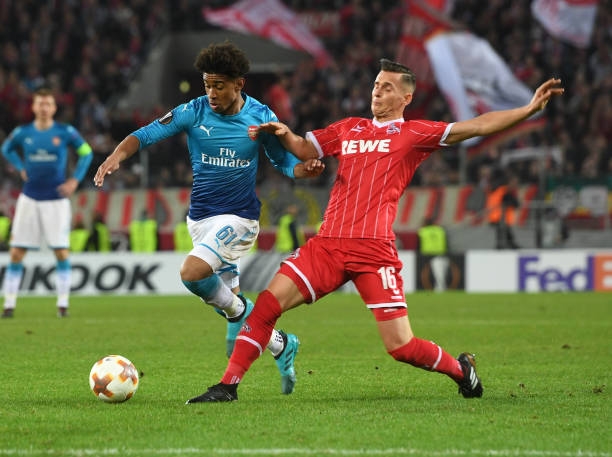 The gunners faced FC Koln last night as they were hoping to make it three wins in four matches but were un fortunately defeated 1-0 by the German club.

Arsenal travelled to Germany to face their Europa League opponents but got defeated but the good thing is that the gunners have qualifiedto the round of 32 after topping the group with 7 points.

The Arsenal players were very disappointed with their performance and felt guilty but they tried more than enough in a noisy rainy match in Germany.

REACTIONS OF TWO PLAYERS ON THE LOSS.

Gutted not to stay unbeaten through the group stage, had the chances just couldn’t put them away. Great support by the travelling fans, safe trip home! #COYG

Disappointed not to get a result tonight and continue our unbeaten run in @uefaeuropaleague. Thank you to all the @arsenal fans! #COYG

The gunners played their last away match in the Europa League yesterday and have been termed as group winners because the other clubs in the group BATE Borisov and Red Star Belgrade who made a draw last night which means that no one will reach to Arsenal even if they lose the last Europa League group stage matches.

Ozil, Lacazette, Per and Xhaka Reactions On Today’s Match