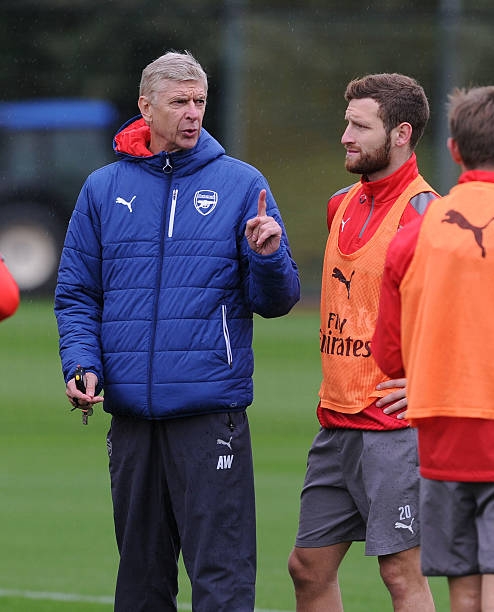 Shkodran Mustafi was very outstanding against Tottenham Hotspur on Sunday as he scored the opening goal in the North London derby.

The gunners miraculously defeated Tottenham Hotspur at the Emirates stadium on Sunday after the squad showed an interesting performance that was so good for their arch rivals Spurs who failed to penetrate the Arsenal defense.

Arsene Wenger was very happy with the performance of the German defender and says that he has qualities of a good leader in him.

“First of all, he is similar to Per on a mental front but of course he is 10 years younger. He is a leader, he is a motivator.’ Wenger is quoted by DAILY STAR.

‘He has a strong focus and he is strong in the challenge. He had an outstanding performance against Spurs.’

‘In the air he was good. He started a bit nervy and slowly became stronger and stronger.’

The defender was very outstanding both in defense and attack because he scored a goal and the manager says that he is extremely happy that he is fully back from the sidelines where he had spent some weeks, it was no secret that the Arsenal defense looked porous without Shkodran Mustafi two weeks ago when the gunners paid a visit to the log leaders Manchester City ending up to lose the match 3-1.

Arsene Wenger has been under pressure since the season begun because his squad has started the 2017/18 campaign on a poor note but the French manager will be hoping that he sees more of the performance he saw on Saturday in the coming matches also wishing that with the return of influential players like Shkodran Mustafi help Arsenal reach top four before Christmas.

Shkodran Mustafi has been very heavily praised by the supporters lose for his dramatic performance against their arch rivals and he also gave them news that they would love by telling them to ignore rumours saying that he wants to leave Arsenal in January. The gunners will be hoping to see more good performances from him in the next upcoming matches.

Monreal Says Sanchez Is Similar To Some Top Sports Man