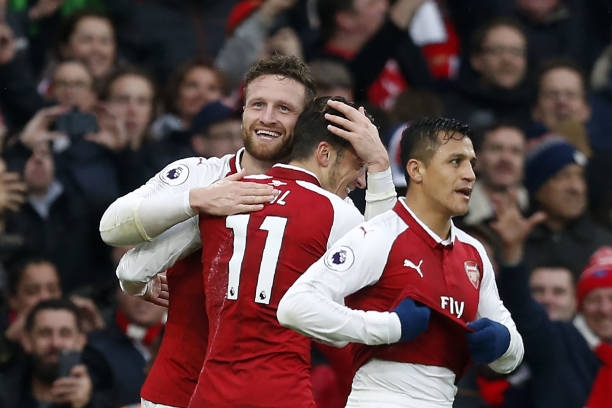 The gunners will be hoping to start a winning momentum and run after successfully beating Tottenham Hotspur 2-0.

The gunners successfully obtained three points yesterday thanks to goals from Shkodran Mustafi and Alexis Sanchez which were quite enough to help Arsenal win this 2017/18 season first North London derby which has got back the spirits of the supporters.

EPL legend and former Manchester United has applauded the gunners for their win against their arch rivals but believes that they won’t be able to hold off Burnley who are their next English Premier League opponents.

“I will back Burnley to win that game, they are in good form it is a hard place to go and you do not know what you are going to get out of Arsenal. The EPL legend told BT Sport.

‘It is not hard to get up for the north london derby, you bounce out of bed.’

‘You want that every week. You want that away at Stoke, you do not know what you are going to get from Arsenal next week.’

The gunners will first play their Europa League before they travel to Burnley hoping to obtain the three points because they would like to get into the top four before Christmas, it is said that Arsene Wenger wants to fully focus on the English Premier League than all the competitions because he has received a complaint from the board.

Arsenal won yesterday but they are still in the 6th position because the clubs above them also obtained three points apart from their opponents Spurs this weekend but will be hoping to at least move into the 5th position next weekend when they take on Burnley who are usually very tough when facing the gunners.