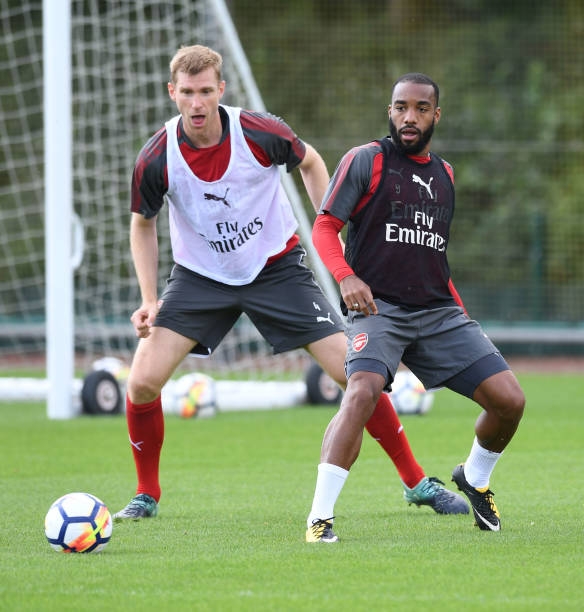 The gunners signed Alexandre Lacazette in the summer transfer window from Lyon on a record fee.

Alexandre Lacazette started being productive as soon as he was introduced to the English Premier League when the gunners were facing Leicester City and the Frenchman opened the scoring in less than 5 minutes making a record.

Per Mertesacker has praised the striker and the captain says that he is surprised of the way the player has fully integrated with the rest of the squad members.

“The way he has settled in has been top class and it makes us feel as though there is more to come. The captain told EXPRESS.

‘The way he has settled in has been top class and it makes us feel as though there’s more to come.’

The gunners broke their record signing fee in the summer after Arsene Wenger was so determined to bring smiles to the faces of the supporters and brought in Alexandre Lacazette who has never the less proved he is a good goal poacher because he has already scored above 5 goals this season which isn’t that bad for a player that isn’t used to the league.

There have been worries that Alexandre Lacazette might not fit well in the playing style of the gunners due to some disappointing results like when Arsenal played against Watford who defeated the North Londoners but the Frenchman has started showing signs that he can partner well with Alexis Sanchez and Mesut Ozil which is quite promising because the gunners would wish that the trio becomes successful like the BBC of Real Madrid.

Most gooners believe that the manager should be giving their record signing more starts and were extremely happy when he started against Tottenham Hotspur and he even made an assist for Alexis Sanchez’s goal.

Monreal Says Sanchez Is Similar To Some Top Sports Man