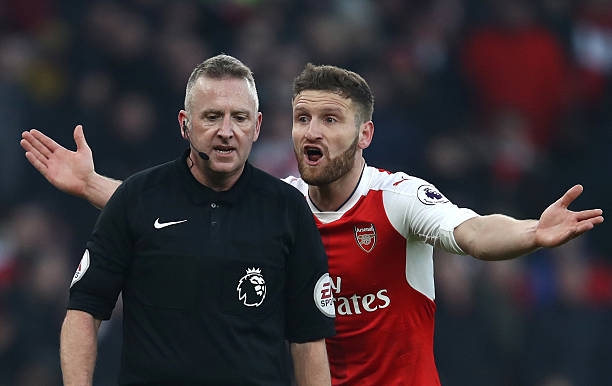 The gunners defeated Tottenham Hotspur 2-0 on Saturday and Shkodran Mustafi was among the players that scored in the North London derby.

There has been constant reports which suggest that the Arsenal defender has thoughts of leaving the Emirates stadium this upcoming January transfer window with a number of top European clubs like Inter Milan who are slowly watching the situation of Shkodran Mustafi in London.

The player was very happy about the performance he showed in the North London derby and took the opportunity to clear the air on his future saying that those rumours are fake.

“Obviously there are so many newspapers who need something to write because it is boring if the paper is empty.’ the defender is quoted by METRO.

‘But I am here, I am standing in front of you in an Arsenal shirt.’

Shkodran Mustafi was very furious about the rumours circulating over his future because said that ‘ you like to get the sh*t, the biggest sh*t when he was asked by the reporters who wanted him to clarify the supporters if it is true that he is planning of leaving Arsenal.

Arsene Wenger signed the former Valencia man in the 2016 summer for a fee above £30 million and the German international has proved that he is worth the amount he costed the French manager over the months, the gunners were very happy to have him back in the squad after he was on the sidelines over the last few weeks, he is regarded as the pillar of the Arsenal defense alongside Laurent Koscielny making a fantastic combination that protects the goalkeeper.

Arsenal supporters will be hoping to see more new faces in the January transfer window but won’t be willing to see themselves release some important player like Shkodran Mustafi who can be very hard to replace in such a small period of the one month transfer window, because most clubs fear letting their players go midst seasons because it can affect the performance of a squad.