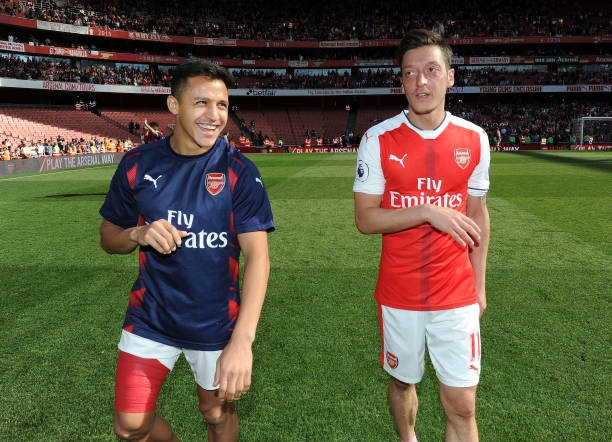 The gunners have been hoping that Arsenal finish making negotiations for their star players, Mesut Ozil and Alexis Sanchez who both have only a few months remaining on their contracts.

There has been strong speculations over the future of the two players this season and most big sports media news companies are always writing reports linking the players out of the Emirates stadium.

Arsenal first choice Petr Cech goalkeeper has opened up the lid on the situation of the duo at the club and says that the teammates are happy to have such two talented players amongst them.

“With the quality of Sanchez and Ozil you are always happy to have players like this in the team’. the goalkeeper is quoted by MIRROR.

‘But you need duo to perform, you need to feel they are committed to the case. I have to say they come every day, they work and as a team we feel.’ The player added.

The gunners will quite get releaved after hearing this statement because they are very worried that they will be going different ways with Alexis Sanchez and Mesut Ozil in the January transfer window because there has been constant reports which indicate that Arsenal have already discovered replacements for the contract rebels because it is said that the gunners will be signing Nabil Fekir in January.

Most football analysts and pundits believe that Alexis Sanchez and Mesut Ozil are the best players that the North London club has had in many years so they say that it would be better if Arsene Wenger tries to convince them to stay rather than letting them go because a new replacement would need much time to adapt to the playing style of Arsenal.

Petr Cech wants to defend both Alexis Sanchez and Mesut Ozil because they are many speculations over their futures as they are being linked with a number of top European clubs. The keeper said;

“Although there is a lot of speculation, their contracts are different to everyone else’s. You can see they are committed to the team.” said Cech.

Mesut Ozil and Alexis Sanchez have been the pillars of the Arsenal squad so it is no surprise that issues concerning them attracts more attention to the supporters, the duo have helped the gunners win three FA Cup trophies in the years they have spent in London.

Arsene Wenger Hints About Biggest Decision Over His Future