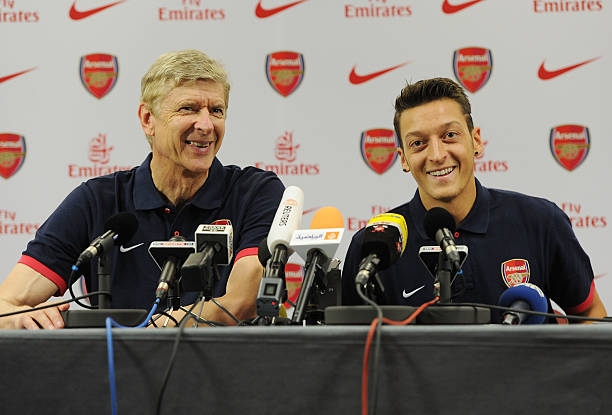 There has been continuous rumours linking Mesut Ozil to Spanish giants Barcelona who have been long term admirers of the German international.

Mesut Ozil has been at Arsenal for 4 years since joining the club in 2012 but his current contract with the gunners got only a few months remaining on his contract and there are no visible signs that he will be signing a new one before the January transfer window.

Arsene Wenger usually avoided questions concerning the renewal of Mesut Ozil but he time confirmed that he doesn’t know about the speculation of the German agreeing a deal with Barcelona;

“What kind of control can I have over that speculation. All these people have agents who can talk to anybody, that does not disturb people. That happens all throught their career.’ the manager is quoted by DAILY STAR.

‘They are honest (Ozil and Alexis). I don’t question their honesty.”

The gunners were hoping for a comforting message which could have at least sounded like that the club has begun negotiations with the duo but it seems Arsenal are ready to at least wait for the year to end before they contact Mesut Ozil over a new deal because per his current contract terms, the former Real Madrid star is expected to leave the club in next year’s summer transfer window.

There was a report which said that Mesut Ozil had received permission from Arsene Wenger to begin negotiations with a club of his choice last week and it said that the gunners had finally made a decision to let go of the German international in order to start making enquiries on players that could be possible and suitable replacements for the World Cup winner who has been a very important player at the Emirates stadium ever since he arrived at the Emirates stadium.

Arsenal supporters will be hoping that the player doesn’t leave midst the season in the January transfer window because they were hoping that he be part of the AOL ( Alexis,Ozil,Lacazette) trio which had started showing that can be a successful front three in the English Premier League.

The gunners will be playing Burnley this weekend and gooners will be hoping to see Mesut Ozil wearing the Arsenal Jersey that day.