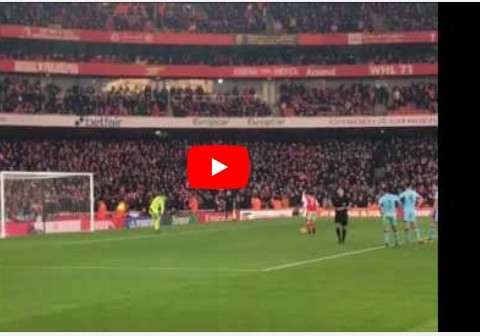 The gunners faced Burnley today and almost dropped two points if it was not for the penalty goal from Alexis Sanchez in the 90’s.

The gunners came into this match well knowing it was not gonna be very easy to get a win against Burnley at their home ground Turf Moor because they have been under performing while playing away these past few weeks.

Alexis Sanchez was very influential through out the match and was the final man that helped the gunners by scoring the penalty in the 92th minute.

WATCH THE GOAL BELOW:

The gunners were extremely happy when the Chilean international sent the ball at the back of the net in the last minutes of the match and will he hoping that Alexis Sanchez makes this as a good start and begin scoring more often because he has underperformed this season.

The Arsenal supporters will be hoping that the Chilean international forgets all the transfer speculations that have been over his future for the last four months but will be hoping that he gives his all to the squad this season as they wait and see if he will stay at the club past the January transfer window.