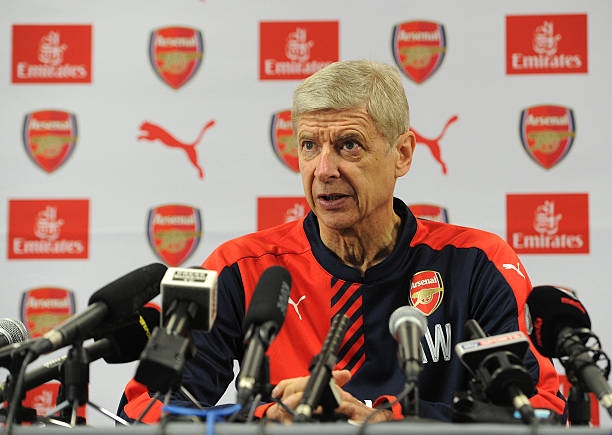 The gunners started the 2017/18 season on a poor note but have started recovering from that embarrassing start as they have at least won their last two English Premier League matches.

Arsenal came into the new season with a lot of confidence because they had signed a striker and most of its players were back from injuries hence having a full squad with depth but the un fortunately obtained three points from first three matches.

Arsene Wenger has been speaking ahead of the gunner’s match against Huddersfield Town which will take place tomorrow at the Emirates stadium and the manager was asked if Manchester City have almost already won the league title and if he is no longer title contenders and he says;

“No, I do not think so, it is too early to say that.’ The manager is quoted by MIRROR.

‘Every team has its vulnerabilities even Man City. We are in November and you win the title in May.’

‘It is not good to have such a dominant team. Every match is unpredictable.”

The manager says that the gunners still have a chance of winning the English Premier League this season even though they are 12 points away from the log leaders Manchester City who are currently un beaten in this 2017/18 campaign and also recently defeated Arsene Wenger’s men two weeks ago with the gunners losing 3-1 to the citizens.

Arsenal are currently on the fourth position with 25 points after successfully getting 8 wins, 1 draw and four losses this season and most supporters had lost trust in the squad but have reignited their support to the team after it won in the North London derby at the Emirates stadium one week ago with the gunners beating them 2-0 thanks to two goals from Alexis Sanchez and Shkodran Mustafi.

Arsenal have a match tomorrow against Huddersfield Town and the manager is expected to field a strong team because he wants to maintain his team into the top four up to the Christmas period so that he then makes a charge for the title starting January.