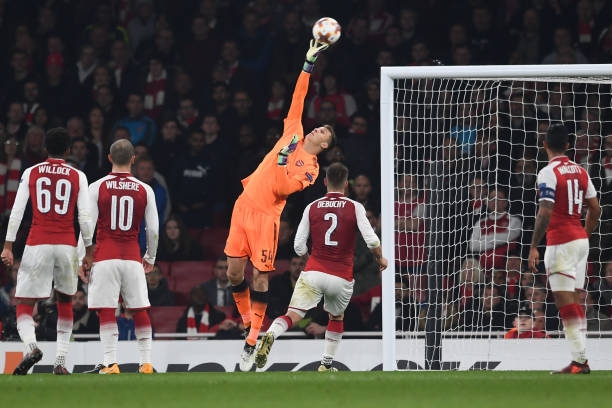 The gunners hosted Red Star Belgrade yesterday at the Emirates stadium and Matt Macey was the man in goal and the teenager made some pretty good saves throughout the match.

The academy player was given the joy of his life when he was chosen by Arsene Wenger as the man to stand in between the goal posts and the young goalkeeper said that it is the dream of every young academy player to be make a regular so he hopes to progress steadily to the next sections of his footballing career.

Arsene Wenger named a tremendous strong lineup against the Serbian club and the manager included three youngsters in the squad with Matt Macey the man to protect the goal line. The manager says that was very impressed by the player, here’s what the boss had to say about the teenager;

“I think he took his chance very well, he is huge, he is quick and you do not often find combinations of that size and that speed, he is very agile as well for a guy who is tall like that.’ the manager told arsenal.com

‘He came late to us considering normally goalkeepers come at the age of 16, he came at 20, but he is intelligent and very focused. That’s why I was pleased to give him a chance tonight and I think he took it already against Norwich and as well tonight he played very well.”

Arsene Wenger is one of the few top managers who believe in young talent development but the French coach has been promoting the potential of academy players since he took over the North London club in 1996 and most football analysts and pundits believe that the trust Wenger gives un experienced players, is one of the main reasons why Arsenal has never won the English Premier League trophy since 2004.

Matt Macey was one of the top great performers in last night’s goal less draw with Red Star Belgrade after he made continuous tremendous saves which helped the gunners keep a clean sheet and without too much doubt qualify for the next round of the Europa League which is so important because it is a knock out stage.

The young teenage goalkeeper will be hoping that he gets another chance in the upcoming weeks because the FA Cup is gonna begin soon and the other fixtures of the EFL Cup or as it is called this season, the Carabao Cup.

Related Topics:Matt Macey
Up Next