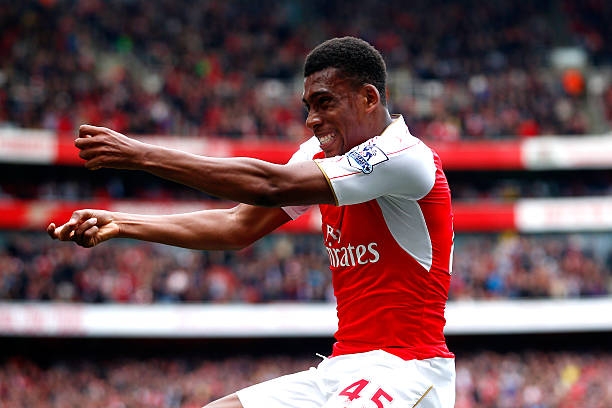 Alex Iwobi made his breakthrough to the Arsenal squad some time back and the Nigerian international has started getting used to playing in the first team squad.

Alex Iwobi has had chances limited this season because there are many players that play his position and the Nigerian international has been saying how he is fairing and says that he will be hoping to improve on his performance when given chances this season.

Alex Iwobi has revealed the player who he looks out at Arsenal and admires and takes him as his hero at the Emirates stadium so he says that Theo Walcott motivates the team;

“Theo Walcott is one of the more experienced players and he would know how to go about doing this, he still motivates the team and puts in a good shift in training. ’ the player told Arsenal official website.

‘I even look up to him at times, he tells me what to do and gives me advice. Everyone is there for each other the chemistry is there.”

The midfielder believes that Theo Walcott is a type of player that brings goals to the games and that he is very influential to the rest of the squad but this will come as a big surprise to many because they would think that Alex Iwobi was gonna mention names of Arsenal top players like Mesut Ozil or Alexis Sanchez but there player mentioned the veteran midfielder as the player he looks forward to becoming like him.

Alex Iwobi also says that he will be trying to get more chances in the English Premier League from the manager and will prove how he can be influential in matches when he is given starts. The Nigerian international has had few chances this season due to the formation Arsenal are using these days.