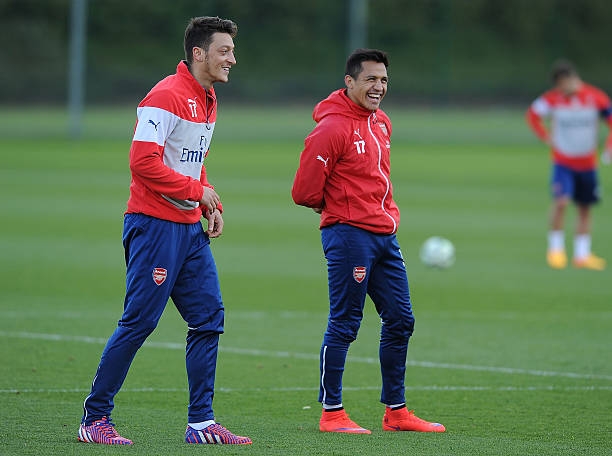 The gunners signed Alexandre Lacazette this year in July and the striker has showed signs that he can be a great striker for the North Londoners because he has scored 8 goals already.

The striker has had a great season so far because he has been very sharp in front of goal this season having scored 8 goals but the other positive thing is that it seems the Frenchman could make a great partnership with Mesut Ozil and Alexis Sanchez this season.

Alexandre Lacazette surely has enjoyed alongside Ozil and Sanchez and the Frenchman has explained the playing styles of the two stars;

“For Mesut, it is about passes, his vision of the game and passes. And for Alexis perseverance. He always wants to go further, be stronger and rise higher.’ the striker is quoted by DAILY STAR SPORT.

‘As well as being very fast, he always wants go even further. I already get on very well with them in every day life.”

The gunners will agree with the statement made by their new signing because they are considered to be Arsenal’s best players they have had in the last five years. The Arsenal supporters are hoping to see an attacking trio consisting of Ozil, Sanchez and Lacazette but the only problem is that it is not certain whether the German and Chilean internationals have refused to sign new deals to extend their stay at the Emirates stadium.

The gunners have started having doubts whether their trio would be an outstanding one like that one of Real Madrid ( BBC ) but with the current results against Manchester United and the current draw against Southampton on Sunday showed that the trio haven’t got used to each other. Alexandre Lacazette has always said that he wishes to score lots of goals for the club to make the fans happy but he might need at least finish this season because he hasn’t fully got used to the English Premier League.

Lacazette Reveals Why He Joined Arsenal ( Not To Win EPL)