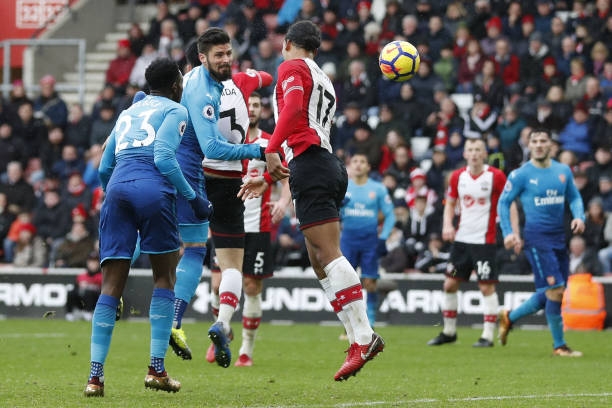 The gunners have been drawn by Southampton today after an interesting and disappointing 90 minutes at the St Mary’s stadium.

The gunners started the match poorly as they conceded a goal in just three minutes and couldn’t find an equaliser in the 45 minutes hence going to the dressing room with them trailing by one goal. Arsenal equalised through Olivier Giroud who scored before the referee had blown his whistle helping the gunners to obtain at least a point away from home.

This draw means that the gunners have wasted a chance to get closer to the English Premier League top four which they dropped from last week after there defeat against Manchester United so their hopes of reaching into the UEFA Champions League spots this season.

1. Arsenal up to now hasn’t learn from past mistakes, it usually finds it hard to win against defensive minded clubs like Southampton.

2. Lacazette is a great striker but Giroud usually needs to be starting in such matches because he fits in them well.

3. The gunners will certainly not win the EPL trophy if they play like this everyday.

4. The gunners had a poor first half and could have won the match if they equalised before halftime.

5. It is time for Wenger to begin using Ospina in EPL because the Czech Republican international is no longer performing well.