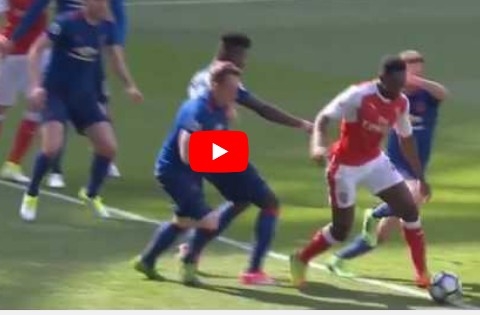 The gunners will be playing against Manchester United tomorrow with Arsenal hoping to maintain their position in the top four.

Arsenal will be coming into this match with a bit of confidence after successfully winning their last three English Premier League matches against Tottenham Hotspur, Burnley and Huddersfi ld Town respectively.

The gunners defeated the red devils the last time they met winning the match two nil on the 7th of Mary, 2017.

WATCH THE VIDEO HIGHLIGHTS OF THAT MATCH BELOW.

The gunners will be hoping to get a win tomorrow when they host Manchester United because most of their supporters believe that this is the type of match which could determine whether Arsenal are still title contenders for this 2017/18 season. The North Londoners started the season poorly after obtaining only three points from 3 matches but have started recovering their form as the first half of the season nears.

Arsenal are currently in the fourth position but will be hoping that wins against top teams like Tottenham Hotspur or Manchester United be deemed as morale boosters to the squad which is currently down with a lot of transfer speculations on the future’s of Arsenal stars.