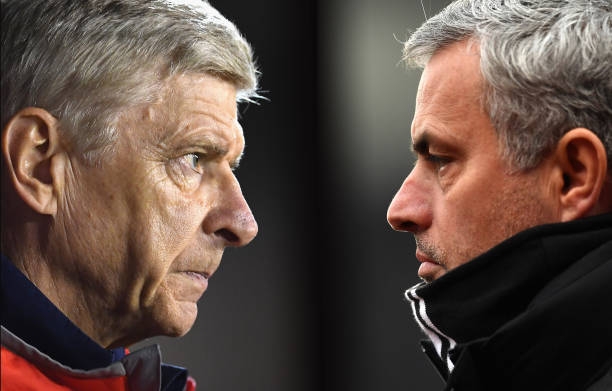 The gunners have not been a club that usually spends a lot on players while their arch rivals Manchester United are huge spenders when it comes to transfers.

Arsene Wenger and Jose Mourinho have been managers that don’t get along for a while and their rivalry is way too old back in the days when the Portuguese manager was still at the Stamford Bridge.

The Manchester United manager has been complaining that he has spent enough on transfers even though he has nearly spent about £300million.

Arsene Wenger was asked on his view about comments made by his compatriot and says that he has spent 21 years at the Emirates stadium with not spending as much as title. contenders, he said;

“I have been in that position for 21 years so I can not start to complain now. There have always been three or four teams richer than I am. I have learned to cope with that.’ the manager is quoted by MIRROR SPORT.

‘We deal with our own situation as well as we can. Man City, Chelsea and United are all richer than us. Have to find ways to be successful.”

The manager is right about his statement he made today because he has always been the cheap one because he usually signs players at a cheap price un like his competitors who break their record signings more frequently while Arsenal usually stop making bids for top players once other clubs enter the bidding war with them.

Jose Mourinho will surely make a reply to the French manager because this isn’t the first time they make a battle of words between each other and even once all most fought blows a few years ago in a match against Chelsea.

Wenger Names His Main 3 Focusses For 2018