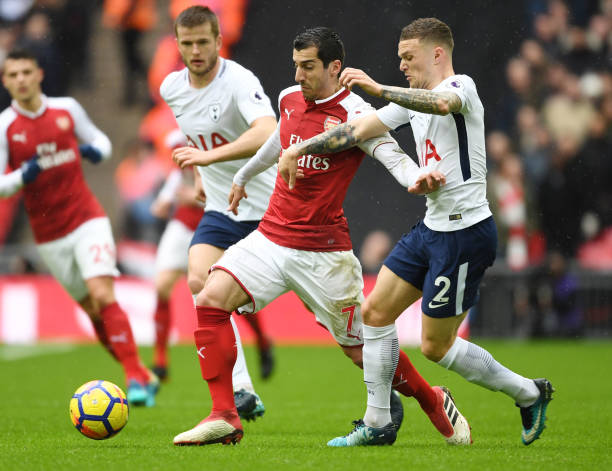 The gunners played against Tottenham Hotspur today at the Wembley Stadium and we’re defeated 1-0 thanks to a goal from Harry Kane.

This was supposed to be the type of match which would have made a declaration showing that Arsenal are back to their best form after having an interesting January transfer window bringing in top stars like Mkhitaryan and Aubamayeng.

The pair were given a start today playing their first North London derby today but rather had an awful performance because they didn’t create chances in today’s match which Arsenal thought that they would perform well in order to win the hearts of the fans because most supporters like watching this derby.

ANALYSIS ON THE MATCH THEY BOTH HAD.

The Gabon international was happy about his first North London derby but was caught many times in the offside trap and he didn’t receive many balls from the midfield hence not getting many chances today.

The Armenian international was very awful today because he wasn’t staying on the ball for long and didn’t create goal scoring chances for the attackers.

Overall these two players didn’t provide much for their club in today’s match because the manager decided to trust them today and gave them his trust.

Read:Spurs 0 Vs 0 Arsenal Half Time Review: