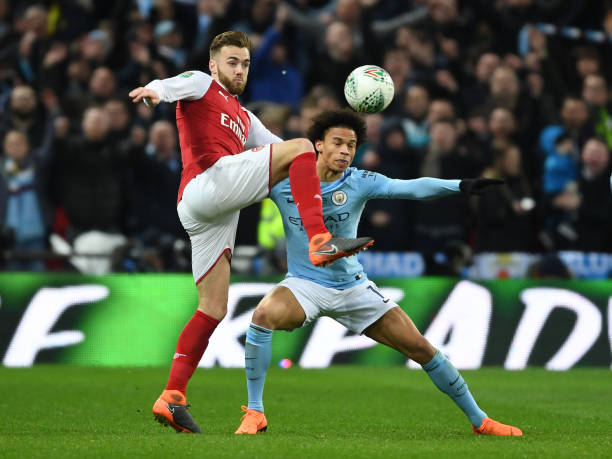 The gunners got schooled by the Manchester City side at the Wembley Stadium after the league leaders scored three goals against the Arsenal Team.

The gunners came into this match when they had no confidence because it seemed like they were already afraid of the Manchester City side.

We have arranged player ratings based on the performance of the players and we are doing this at a rating of 10.

The Colombian international had an awful performance against the citizen’s today and he can’t be blamed even though he swallowed three goals.

The English international was surprisingly given a start but he didn’t repay the trust today.

The German international made many blunders through out the match and most fans are disappointed in him.

The French international is an experienced defender but he couldn’t cope up with the attacks of City players.

( Ozil kneeling down in match against City)

The defensive midfielder wasn’t at his best today.

The attacking midfielder didn’t perform as he was expected this season, he had a terrible match.

The English international can be deemed as the best Arsenal player on the pitch today.

Probably he didn’t show why he is the Arsenal’s record signing.

Analysis:How Do Arsenal Stop The Rot

Analysis: Has Arsenal Wasted Their Only Chance For Being Champions Of A Trophy