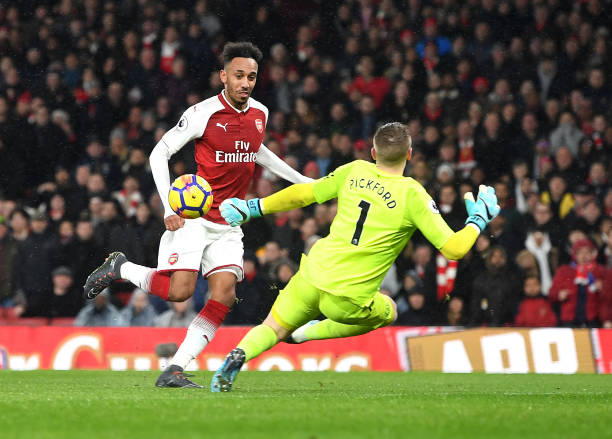 The gunners took on the toffees at the Emirates stadium on Saturday and the Arsenal team showed a remarkable performance such as the one in the first leg.

The gunners defeated Everton 5-1 thanks to an attack minded squad which looked never gave them a breathing place because the goals kept going in. There are some interesting events that happened that match so let us take a look at them one by one.

The Gabon international played his first match as an Arsenal player and he re paid the manager for trusting him by scoring a goal in his debut match. The player netted the fourth goal of the match and looked active through out the whole match.

2. Ramsey Gets His First EPL Hatrick

The Welsh international was the star of the day after he terrorised the defense of Everton and scored a hatrick which was his first ever in the English league. He opened the scoring, netted third and then later sealed the win with a late goal goal to make it 5-1.

The Armenian international was finally given his first start on Saturday against the toffees and he was pretty awesome as he made three assists in the 5-1 match. It seems like Mesut Ozil has finally got a competitor.

All in all, the whole squad performed interesting well with all the defense, midfield and attacking sectors working together to take down Everton.

Analysis  On Aubamayeng Signing, Plans Wenger Has For Him And His Past Glory Days