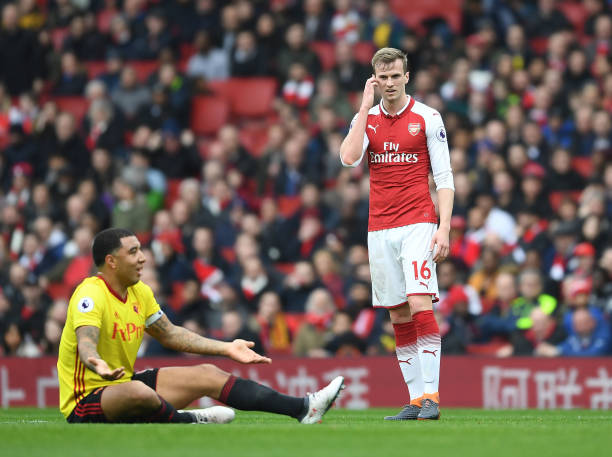 Rob Holding was among the starters that were picked up by the manager on Sunday when the gunners welcomed Watford at the Emirates stadium whom they convincingly defeated 3-0.

The gunners started off with a junior or should call it a weak defense because it had names like Holding but the English international was very dominant as he oppressed the attackers of the hornets throughout the match.

Most match previews about Arsenal‘s match against Watford were talking about how the forward of the hornets Troy Deeney said that the gunners lack cojones after his team had defeated the North Londoners 2-1 but Holding has revealed that those comments gave them much determination to win the match because they wanted to prove to him and critics that they do got cojones.

The youngster has this to say about the performance of the team;

“It was definitely in the back of our minds.We don’t like coming off the pitch and someone saying that about us.’ Holding told Arsenal media.

‘We want to show our fight. I think today with a clean sheet they didn’t have a sniff apart from with the penalty.”

It seems Holding was happy to have been given a start because it had been days since he last made a start in the first team and he repaid the trust of the manager showing off a spectacular performance.

Wenger Makes His Say On Petr Cech’s Performance Against Watford