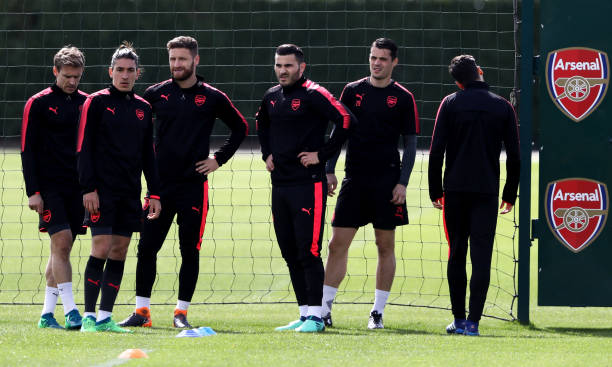 The first leg of the Europa League semi finals between Arsenal and Atletico Madrid has started and it’s already been 45 minutes with the score board reading 0-0 so far.

The match has started lively for both of the teams today with both of the squads very fearful of doing any mistake which could lead a loss in tonight’s heated match. The gunners have however been impressive in the first half because they have tried to stop the visiting side from making any shot towards their goalkeeper David Ospina who is in the goal posts for Arsenal today.

In the first 30 minutes of the match, Arsene Wenger’s men had already registered 12 shots with none of them going into the back of the net while the visiting side had 0 but that is usually not important because it takes just one shot on target to score a goal which is more important.

The Arsenal team was very lucky that Simeone’s men got one of their players sent off after getting two yellow cards which automatically becomes a red card in the 9th minute and it seems playing while 10 men has heavily affected their performance against the gunners because they are working hard to try to seal off their goal.

The home supporters will be curious to why the gunners have failed to put the ball into the back of the net while their playing against a team that has one player down but the manager will have to talk to them in the dressing room because they are lucky to have got one of Atletico’s men sent off in the first 9 minutes.

How Will Martial Fit In At Arsenal!